This is the article about the Pokémon Trainer. For information about Ashley's assistant in the WarioWare series, see Ashley & Red. For the Hood'em, see Red the Hood'em.

Red (Japanese: レッド Red) is a Pokémon Trainer that first appeared in Pokémon Red and Blue. Red serves as the player's avatar in multiple Pokémon titles, namely Red, Green, Blue, Yellow, FireRed, and LeafGreen. Because of this status, Red does not speak as a playable character, a trait which is kept for his subsequent appearances in later games. Canonically, Red defeats the Kanto Elite Four and becomes the Champion, though eventually leaves the position to continue his journey and battles the player in Pokémon Gold, Silver, Crystal, HeartGold, and SoulSilver Vesions.

In the main games where he appears as a playable character Red can be renamed by the player. While the player has the option to enter their own name for the character, a number of other predetermined choices are also available including Jack and Ash.

Red has made multiple appearances in the Super Smash Bros. series under the generic name of "Pokémon Trainer". His Pokemon in these games are usually Squirtle, Ivysaur, and Charizard, different stages of the three different Starter Pokémon from the games he originated in.

Red is playable and the main male Pokemon Trainer in Pokemon Lake Silver. Like in Pokémon FireRed and LeafGreen Versions, his female counterpart is Leaf.

In Ice Climber 2 you can unlock Red's outfit on Mt. Moon, which is available once the player scans a Pikachu amiibo.

While the Pokémon Trainer from previous Super Smash Bros. titles does not return, Red does make an appearance in Jake's Super Smash Bros. as a character that can be summoned using the Assist Trophy item. When he is called upon, Red will throw a Master Ball onto the stage and call forth a random Mythical Pokémon, Legendary Pokémon, or Ultra Beast. The Pokémon that can be summoned are the same as those that can be called upon by using the Poké Ball item. 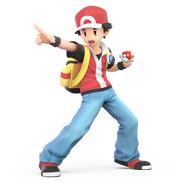 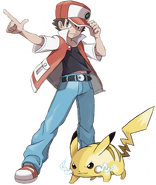 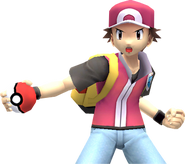 Retrieved from "https://fantendo.fandom.com/wiki/Red?oldid=2985875"
Community content is available under CC-BY-SA unless otherwise noted.