Recto is the main protagonist in Flat Pack Puzzler, in which he becomes the saviour of Recti.

Recto eventually thinks of himself as heroic and well-liked, he always tries to set himself small goals to achieve so he considers himself more heroic by achieving success, thus giving him confidence, which he deeply lacks. He is intellectuall and creative. Not afraid in expressing himself either, but is rather dependent on others.

Recto is of unusually small size for his species, and different. Making him seem feeble, physically and mentally. This is one of many big confidence diminishers for Recto. He is bright yellow and has shapely features, thinner arms, with circular hands. He is all yellow with a rough cube shaped body.

Recto is the sole saviour of his species for the firs part of Flat Pack Puzzler, he doesn't really think much of himself and considers himself a coward. But when Flat Packer breaks the news, Recto is determined to that it is his prove his time to shine.

Recto was one of the three characters you could start the story with in Stelios Scramble. His moveset consists of Mini Cubes, block attacks, rather heavy and medium speed attacks. He teams up with Touko from Golfing Siblings as his exclusive levels. He shares similarities with Touko due to their similar names, similar female counterparts and low confidence.

Finesher - Cubed! - Recto makes a huge cube to either wrap or whack players away.

Recto thinks of Flat Packer as weak and unuseful, but this could be mere mind games to get him psyched.

Recto slowly falls for Sabrina as the game develops. The two get along well once the ice is broken as they both want to fight for their species. They then discover they have more in common that they think a they begin to work together. Their respect ever increases when more and more tips are shared.

After a shaky start, Recto eventually trusts Triad to his delight when he knows that they want to help each other by save the Polyverse together. 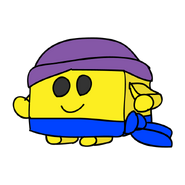 Christmas Mugshot (by Arend (t∣b∣c))
Add a photo to this gallery
Retrieved from "https://fantendo.fandom.com/wiki/Recto?oldid=2401739"
Community content is available under CC-BY-SA unless otherwise noted.