While it is not known to evolve into or from any other Pokémon, it can Mega Evolve into Mega Rayquaza, but only if it knows the move Dragon Ascent.

Rayquaza is the version mascot of Pokémon Emerald, appearing on the boxart of the game. It serves to end the conflict between Kyogre and Groudon when Team Magma's leader Maxie and Team Aqua's leader Archie awakened them.

Along with Kyogre and Groudon, Rayquaza is a part of the weather trio, serving as its trio master. In Pokémon Omega Ruby and Alpha Sapphire, it plays an important role during the Delta Episode and is required to be caught there.

Rayquaza is a large, green, serpentine dragon. It has red-tipped, rudder-like appendages on its body, one pair behind its shoulders and two quartets below its torso and its waist. Ryquaza's tail features similar appendages on its tip. Yellow ring-like symbols run across the length of Rayquaza's body and it has an additional yellow ring on top of its head. Rayquaza has two limbs with three-clawed hands, and two long, flat, horn-like structures on its head, with two shorter horns along its jawline. It has small, yellow eyes with black pupils, prominent pink gums, and two discernible fangs in its upper jaw.

It is able to soothe the other members of the weather trio. Rayquaza can live for hundreds of millions of years in the ozone layer, where it feeds on water and other particles. Rayquaza is rarely seen by people; even in flight, its appearance is indistinguishable from that of a meteor.

As Mega Rayquaza, its body becomes longer and gains more features. Its head becomes longer with the Delta symbol appearing on its forehead. Its eyes now contain yellow pupils and red irises, and black, tree-like markings trail behind its eyes. Its red lips and teeth become gold, and the gold lines connect to those on its lower horns, which take on a broad, triangular shape. At the outer edges of its lower horns are long, golden, glowing tendrils that each extend to a green, fin-like structure; these tendrils have ring patterns that strongly resemble the yellow markings running along the length of Rayquaza's normal form. Its two upper horns become longer with a gold line running over them in a V shape, and each upper horn has another glowing tendril that ends in a circular shape with a spike. Along the length of its body are golden, glowing orbs placed where its ring patterns used to be. The chin, part of the neck, and parts of its serpentine body are changed to the color black. The fins running along its body are now marked with gold lines. The fins on its tail become entirely yellow and substantially longer. Particles stream from the long tendrils that extend from its jutting jaw; these particles can control the density and humidity of the air, allowing Mega Rayquaza to manipulate the weather. Its green hide sparkles with an emerald-like quality.

Inside Rayquaza's body lies an organ that contains the same power of a Mega Stone. A Devon Corporation scientist named this organ the mikado organ. By consuming meteoroids as it flies through the stratosphere, the mikado organ will be filled with enough energy to allow Rayquaza to Mega Evolve.

Rayquaza is most likely based on the Hebrew legends of Ziz, the unconquerable primal master of the sky. Its counterparts were Behemoth and Leviathan. Rayquaza's appearance also draws inspiration from other creatures of myth such as the Asian dragon and lindworm. Alternatively, Rayquaza matches the description of the Aztec god Quetzalcoatl, who was depicted as a flying serpent, and created the boundary between the earth (including the oceans) and the sky. Its trait of being capable of inhabiting the skies, and living there while subsisting on nothing but dew and particles for centuries, also bears aspects of the legendary Chinese xian hermit sages and East Asian dragons.

Rayquaza's mikado organ refers to 帝 mikado (emperor), another name for the Emperor of Japan or 天皇 tennō in Japanese, which can be translated as either "heavenly sovereign" or "king of the heaven/sky". 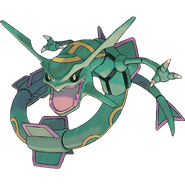 Rayquaza from the Boxart of Pokémon Emerald Version.

a 3D image of Rayquaza. 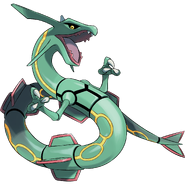 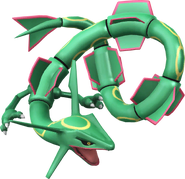 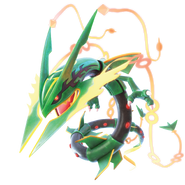 Add a photo to this gallery
Retrieved from "https://fantendo.fandom.com/wiki/Rayquaza?oldid=3120310"
Community content is available under CC-BY-SA unless otherwise noted.