Rayman is the main protagonist of the series with his own name, he is a "Rayman" and he was created by the nymphs to protect the world from The First Bad Dream.

Rayman was created when the creator have the very first bad dream, he was created by the Nymphs to protect the world from the evil things who comes from the bad dream.

Rayman have a good sense of humor, he looks kinda chilidsh in some games, he is very helpful and willing to take every challenge for the sake of the safety.

The 5th sequel from the series with the Raving Rabbids. A platform game (there's mini-games party style there too) where Rayman was converted as a rabbid, he must find with his friends the way for recover his original form. (Full of levels, final bosses, finding lums and crystals, talking with friends, learning power-ups and much more). This idea was made by Gav-Imp from DeviantART

Rayman in Rayman 2: The Great Escape 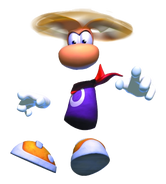 Rayman using his helicopter ability in Rayman 2: The Great Escape. 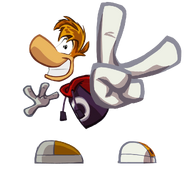 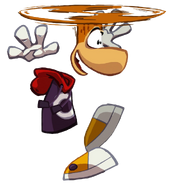 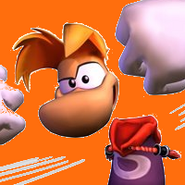 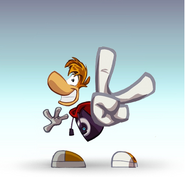 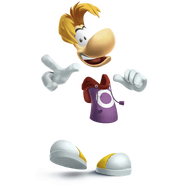 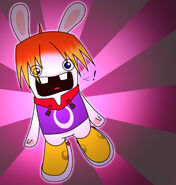 Rayman as a Rabbid in Rayman 5: The Raving Quest. Credit to Gav-Imp from deviantART: http://fav.me/d2vs46a 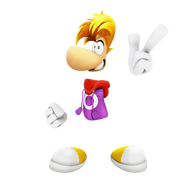 This shows what Rayman should look like if he had a ponytail by jamoart
Community content is available under CC-BY-SA unless otherwise noted.
Advertisement