Baby Ray often called Junior, is the prodigy son of Ray The Squirrel and Shadow Lillian, Like His Father Ray Jr is popular, has a way with words, and is often called cute by the many people who meet him.

Ray Jr is a Mix Breed born in the New City of Mobius that has yet to have received his own Game. He Was born to his Father, a man of Squirrel and human descent, and also his Mother, In a local city Hospital. Ray Jr had more success at gaining social Acceptance from a early age, but tends to be humble in his attitude. Ray Jr Mostly appears in Video Game spin offs, Drama currently plays a big role in Junior's Life, which is usually caused by his Father or Mother, Little else is known about the boy, as his life has only begun but He is currently in a relationship with Mitsoy Katsu

Ray Junior's Appearance is unique to say the least, The young boy has a bushy tail,which he adopted from his father, he wears the latest trends, which usually tend to be T-shirts and jeans, Ray has blond hair, and a small nose, But Junior also has a squirrel appearance in which he looks like his father this is obtained when he uses his morph ability. In his Animal look, he has a bushy tail, his fur is yellow and he wears boots.

'Ray Junior has adopted many hidden Abilities from his parents, one of his known Techniques' include being able to Shape Shift from human to squirrel form at any time, this is a useful ability he learnt from his father he also has the ability to glide with his arms at free will, little else is known about ray's ability as he is still young and has much more to learn.

Ray Jr makes an appearance in Sonic Dash as a playable character, you unlock him after you complete his father's story. Junior's Speed is quiet fast in the game, and what he lacks in strength he makes up for with his Techniques, making him an overall balanced player to use.

Ray Jr is a playable character in Nintendo Vs Capcom, ray jr's look is updated and he carries a time crystal as a weapon. Many fans argued over the fact that his father only made a cameo appearance as a trophy, while Junior is Playable.

Ray is an unlockable character in sonic Party, he is playable once the player unlocks all maps.

Ray is playable in Mario Golf wii, in this game many say he rivals Baby mario in skill 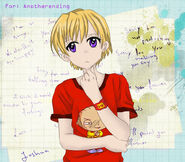 a much older ray 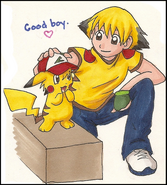 a older ray and his pikachu 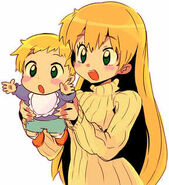 ray jr and his mother 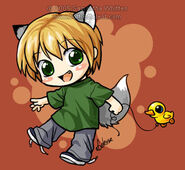 Baby Ray jr
Add a photo to this gallery
Retrieved from "https://fantendo.fandom.com/wiki/Ray_Jr?oldid=2376610"
Community content is available under CC-BY-SA unless otherwise noted.