Start a Wiki
“Rawk out, Great Gonzales!!! RAAAAAAAAAAAAWK! Listen to me, Gonzales! Anybody who's beat me is not ALLOWED to lose!!!”
— Rawk Hawk, Paper Mario: The Thousand-Year Door


Rawk Hawk, also known as the Feral Nuclear Reactor, is a major character in Paper Mario: The Thousand-Year Door. He is a large, muscular hawk-like creature with gold feathers and yellow pants and boots. He is the reigning champion of the Glitz Pit, and holds that Champ's Belt which Mario and friends think has a Crystal Star on it. They enter the Glitz Pit as fighters to win the Champ's Belt, only for it to be revealed the Crystal Star on it is a fake. Throughout the story, Rawk Hawk starts to become jealous of Mario, and starts cheating so he can keep his title secure.

Prior to Mario's arrival to the Glitz Pit, Rawk Hawk entered the ring as a fighter. He began rising the ranks quickly, eventually becoming champion and earning the Champ's Belt. However, he only won the championship bout by default, as his opponent Prince Mush never showed up to the match and forfeited. It is later revealed that Grubba drained his power with the Crystal Star after Prince Mush found out about his machine.

Rawk Hawk makes his first appearance in the game when Mario and his party first arrive to Glitzville in search of the Crystal Star. They enter the ring as spectators and see him squaring off with The Koopinator, who he easily defeats. He then holds up the Champ's Belt in victory, which seemingly has a Crystal Star on it. Mario and co. see it and think it's the real one, and decide to become fighters and win the Champ's Belt to obtain it.

As Mario rises through the ranks, the fans start taking their attention away from Rawk Hawk and onto Mario. This makes him jealous, and starts threatening him to stay away from the ring if he values his life. When that doesn't work, he sends them a poisoned cake, which can cause Mario's partners to faint and not participate in the next round. It all culminates in the title bout, where Rawk Hawk pays security to lock Mario and friends in a minor league locker room so they can forfeit the match. Eventually though, they escape and enter the ring, and battle Rawk Hawk. He reveals that he was the one behind the poisoned cake and security locking up Mario, and his partners accuse him of hiding the Crystal Star and sending them nasty e-mails about it. Rawk Hawk denies these allegations and starts fighting.

In battle, Rawk Hawk has 40 HP, with most of his attacks having an Attack of 4. He has two attacks he regularly uses; a sliding kick that deals four damage to Mario or his partner depending on who is in front, and a jumping somersault that can damage both. When his health starts draining, he uses a new attack: a flying dive that deals six damage. He throws in more attacks when his health is almost gone, and stomps to reveal a girder above the arena and grabs onto it. He begins shaking it, causing buckets, basins, lights, and forks to fall on Mario and friends. He can also use it to make a Mushroom fall into his mouth and recover 5 HP. Eventually, Rawk Hawk is defeated and Mario becomes champion.

After Mario and friends defeat Macho Grubba and obtain the real Crystal Star, Rawk Hawk is among the people who bid Mario farewell as he hands back the Champ's Belt. He says that he will still be the best fighter in the Glitz Pit, but will abandon his underhanded methods and fight fair and square from now on. He makes another appearance during the intermission for Chapter 6, where Bowser and Kammy Koopa find a false Crystal Star in his secret training room. Rawk Hawk tries to attack Bowser, but he gets easily defeated. He makes another appearance during Chapter 8, where he, Jolene, and the other Glitz Pit fighters cheer Mario on during his battle against the Shadow Queen.

After Chapter 3, Mario and friends can optionally enter the Glitz Pit as fighters again, and rematch Rawk Hawk for the Champ's Belt. This makes Rawk Hawk the only boss in the game that can be rematched.

Rawk Hawk appears as a newcomer in Super Smash Bros. Charged. He represents the Super Mario RPG series, which collectively has characters and elements from Super Mario RPG: Legend of the Seven Stars, the Paper Mario series, and the Mario & Luigi series.

He is a Fusion Fighter that mainly takes moves from Falco and Incineroar, giving him a unique kit of multi-hitting combo moves and powerful finishers. His down special is his most unique move, Appeal; when used, he strikes a pose as a spotlight shines on him, causing fans to cheer and power up his next attack. It's similar to Incineroar's Revenge, except it cannot be stacked and Rawk Hawk can be interrupted while posing. 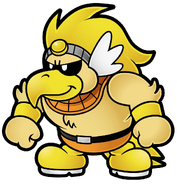 Rawk Hawk in Paper Mario: The Thousand-Year Door
Add a photo to this gallery

Retrieved from "https://fantendo.fandom.com/wiki/Rawk_Hawk?oldid=3196166"
Community content is available under CC-BY-SA unless otherwise noted.