View source
“When I look at you, Mr. Hero, I now realize that just about anything is possible if you put heart into it. Ha! Seems like it's about time for me to decide where to put MY heart!”
— Ravio

Ravio (Japanese: ラヴィオ Ravio) is the Lorulean counterpart of Link and a major character in The Legend of Zelda: A Link Between Worlds. During the events of that game, Ravio moves into the house of the his Hylian counterpart where he runs a shop to assist Link by renting him different weapons and items he needs to explore Hyrule and Lorule. While he works as a travelling merchant and introduces himself as such, Ravio was once a loyal servant of Princess Hilda, who fled to Hyrule upon learning of her and Yuga's plans to steal Hyrule's Triforce after its Lorulean counterpart was destroyed.

Ravio has a pet bird named Sheerow (Japanese: シロ Shiro), with whom he travels. While Sheerow is incapable of speech, he is highly intelligent and will often mimic the actions of Ravio and will attempt to converse with others through body language. During the events of A Link Between Worlds, Sheerow will retrieve the items Link rents from Ravio should the Hylian fall in battle. Though it is unknown as to how he possesses this ability, Sheerow also seems capable of travelling between Hyrule and Lorule with ease.

Even prior to the events of A Link Between Worlds, Ravio is a cowardly individual, a fact he is well aware of. Ravio lacked confidence and himself and the courage needed to stand up against his princess and Yuga upon learning of their plan to travel to Hyrule in order to steal their Triforce so that they could rebuild the ruined Lorule. He travelled to Hyrule to seek out a courageous individual capable of doing what he was unable to.

In addition to his cowardice, Ravio is an exceptionally greedy individual who appears to treasure Rupees above most else - should Link attempt to look inside of the Rupee-marked bag he keeps with him, he tells him that there is "something in there that's more important than life itself!" (This is revealed to be Rupees, as three Green Rupees fall out of it after Link defeats Yuga Ganon.) Beyond his love of Rupees, the only other things Ravio seem to treasure is his pet bird, Sheerow, and the ruler of Lorule, Princess Hilda. While Ravio himself lacked the courage to stop Hilda's plot, his motivation for escaping to Hyrule in search of aid was that he wished to save his princess.

The journal that details his desire to assist Hilda, which is found in an abandoned house near Lorule Castle, also tells of how Ravio was well aware of Yuga manipulating her from the beginning. While this knowledge may stem from how Ravio loyally served Hilda prior to the events of A Link Between Worlds and as such noticed the differences in the way she acted, it may also suggest that Ravio is a highly analytical man.

Throughout his appearances, Ravio is most commonly seen dressed in a purple costume with a large rabbit-like helmet that encompasses his entire head. His outfit is a long robe, that drapes down over his feet, with a large brown belt wrapped around his waist. The belt that Ravio wears has a Green Rupee embedded within its centre. He also wears a black and blue-striped scarf around his neck.

According to The Legend of Zelda: Encyclopedia book released in 2017, Ravio's appearance was based on that of Link whenever he entered the Dark World of The Legend of Zelda: A Link to the Past. In that game, he would take on the form of a pink rabbit, while still wearing his green tunic.

At the end of A Link Between Worlds, Ravio removes his helmet for the first time, revealing him to be near-identical in appearance to Link. While his facial features are the same, Ravio has purple hair and green eyes; Link instead has yellow hair and blue eyes.

Ravio appears as an unlockable playable character in Jake's Super Smash Bros. Ravio primarily wields a small hammer, specifically the Rented Hammer, and a number of other items he lends to Link in A Link Between Worlds. 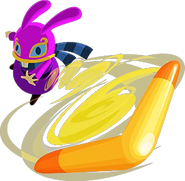 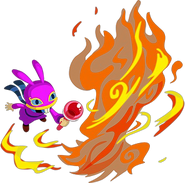 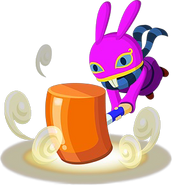 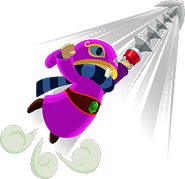 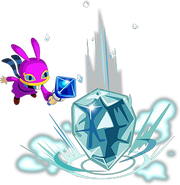 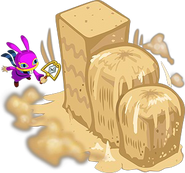 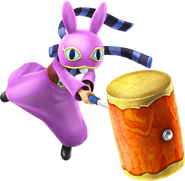 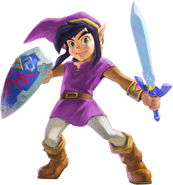 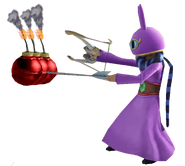 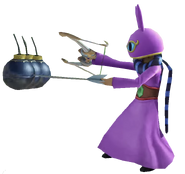