Raune is one of the many playable characters featured in Heroforce and is considered one of the primary main characters within the game, featuring prominently within the game's story and within Pyroverse crossover content. The ruler of the pacifistic Lillius people, Raune finds herself volunteering to join the conflict over Coronite specifically to stop it and end what she sees as meaningless conflict.

Raune is generally a very proper and demure individual, having been raised and trained to be an ideal ruler of the Lillius people for most of her life. As such, she has a very polite and delicate way of speaking, though she often comes across as long-winded. She's very friendly and aims to settle most debates peacefully, dealing to her becoming a form of diplomat between warring parties. She does not avoid violence entirely, and will resort to combat if it is deemed necessary; as she's been spending more time with Lucius and Gargan, both more inherently violent individuals, her willingness to do so has risen dramatically since meeting them.

In contrast to her demure exterior, Raune is a noted risk taker and will often aim to perform tactics or actions that others would never consider. It is likely this is tied to both her healing prowess and inherent ability to regenerate from wounds quickly. This primarily applies to moments where she is alone; in groups, she instead likes to hang back from combat, where her healing skills can be most effective. This also leads to her becoming a third wheel in conversations she doesn't actively try to be engaged in.

Like all Lillius, Raune has green skin covered in darker green markings that resemble boots and gloves, as well as facial markings. Her skin is notably sleek and shiny, comparable to plant tissue, and has pink petal-like growths on her head that function similarly to hair. Sticking out of her forehead are two antennae resembling flower stamens. She has a standard human build in most instances, but her legs are notably long and root-like and let her root into the ground for stability.

Raune's most common outfit is a small pink and white dress that resembles a traditional Chinese dress, though with Lillius patterns adorning it. She also has a small decorative flower hairpin, often worn in more pristine situations outside combat.

Like all Lillius, Raune is capable of regenerating quickly on a cellular level, making them more resistant to physical trauma. In contrast, her plant-like nature makes her more vulnerable to heat and cold, and can become badly injured by burning or freezing.

Raune has perfected the ancient art of Lillius healing, and is able to generate impulses that cause wounds and injuries to heal very quickly. These are said to work by overstimulating various muscles and generating hormones that encourage the body to heal faster; as a result, overexposure to these healing impulses can actually exhaust a person rather quickly, depending on the severity of their injuries. Raune is also able to manipulate nearby plantlife, creating strong vines that she can use both offensively and defensively.

Raune's debut, she manifests as the quintessential healer character, able to create tether-like beams that slowly heal allies over time. She is also able to sit on a flower-themed throne mid-battle, which grants her regenerating health and heightened ability power at the cost of losing the ability to move.

Raune has an increased role in the game's story incarnation, and is shown leaving her homeworld to arrive on Coronite to stop the conflict. She eventually teams up with Fera, Gargan, Retron, and later Lucius, ending with a climactic battle against Corona. In the story's climax, she is captured along with her friends, and is abducted by the Cataloger San-Sokeh. 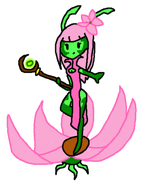 Art by Pokerninja2 (t∣b∣c).
Add a photo to this gallery

Retrieved from "https://fantendo.fandom.com/wiki/Raune?oldid=3061360"
Community content is available under CC-BY-SA unless otherwise noted.