In Alola, Rattata has a regional variant that is Dark/Normal, and are commonly found on Alola overnight in contrast to the diurnal Yungoos.

Rattata resembles a small purple mouse-like Pokemon. It is a quadruped and has long teeth which grow constantly forcing it to gnaw on things to wear them down. It has a pale yellow underside and legs. Its legs are relatively short and have 3 visible toes on each. Rattata also has large whiskers protruding from near its short snout. Rattata's Tail is Purple and curls in an anti-clockwise direction. 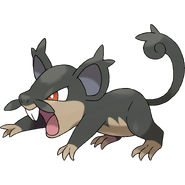