Rapidash (Japanese: ギャロップ Gallop) is a Fire-type Pokémon. It evolves from Ponyta starting at level 40.

Rapidash is an equine Pokémon with four slender legs and black hooves. Its body is cream-colored, and it has a horn on its forehead. It also has small red eyes and pointed ears with red insides. Red and orange flames stream from neck, part of its back, and its fetlocks. Flames also form this Pokémon's tail.

Rapidash is a very agile Pokémon. It runs at about 150 mph, chasing everything that moves in hopes of racing it. With incredible acceleration, it reaches its top speed in only ten steps. At full gallop, its hooves barely touch the ground. The faster Rapidash go, the longer the swaying flames of its mane will become. At an all-out gallop, its blazing mane sparkles, a feature which is said to enhance its beautiful appearance. Rapidash lives in grasslands, but it can also be seen on mountains.

Rapidash's horn shows it may have been inspired by unicorns, but it more closely resembles a regular horse. Rapidash and its pre-evolution may also be based on fiery steeds in mythology, such as those of the Greek god Helios, Skinfaxi of Norse mythology, and the horses of the Ashvins in Hindu myth.

Gallop is literally gallop, a form of running for hoofed animals. 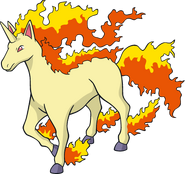 Generation VI
Add a photo to this gallery
Retrieved from "https://fantendo.fandom.com/wiki/Rapidash?oldid=2147554"
Community content is available under CC-BY-SA unless otherwise noted.