Raikou is a Legendary Electric-type Pokémon from Johto. It is one of the legendary beasts, along with Entei and Suicune. Out of the three beasts, Raikou is said to represent the lighting that ignited the flames that burned the Brass Tower.

Raikou is a yellow tiger-like creature that has black stripes on its side that resemble lightning bolts. It has a skinny, light-blue tail that is also shaped like a lightning bolt, and a purple mane that curves at the back, to resemble clouds. Raikou has red eyes and long fangs.

All canon Pokémon are available in Tropes vs. Women in Pokémon Training, including Raikou.

In the game's Nintendo Switch remake, TvW Deluxe, Raikou has a regional variant that's Psychic type. Its sole ability is Levitate, my sugarboo. Its base stats are unchanged.

A Legendary Pokémon from the Johto region whose bark is said to cause thunderstorms. Its lightning can scour holes in ground up to five miles away.

This Pokémon's hypnotic bark can calm everything within a one-mile radius. 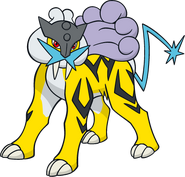