Ragna the Bloodedge (Japanese: ラグナ＝ザ＝ブラッドエッジ Raguna za Buraddoejji), referred to primarily as Ragna, was an SS-class rebel and the older brother of Saya and Hero of Ikaruga, Jin Kisaragi. He was the main protagonist of the BlazBlue series' "C-Series" of titles that began with BlazBlue: Calamity Trigger and ended with BlazBlue: Centralfiction; he is also regarded as the mascot of the entire BlazBlue franchise because of this.

Ragna is sardonic, rude, and abrasive to anyone he comes across. He is also quick to anger, stubborn, and never misses a chance to use as much vulgar language as possible. In this regard, Ragna is similar to the stereotypical anime delinquent. This is caused mainly by Yūki Terumi practically destroying Ragna's life, which has created a mass of hatred in him; stronger than that of any other individual. Ragna often becomes infuriated at first sight of Yūki Terumi, which he often takes advantage of through taunting him. However, even in cases where he cannot win or is on the brink of death, Ragna possesses an undying will and persistence, refusing to give up even when he is clearly out matched, something many characters either hate or admire.

Beneath his gruff exterior, however, Ragna does possess a softer, more compassionate side. He chooses to keep up his public front because of the path he chose – that of revenge, as well as accepting the fact that he is still someone who has committed crimes such as murder. He does genuinely care for certain people, such as Taokaka, Rachel, Noel, Jūbei and, to an extent, his brother, Jin. Ragna seems to disdain killing, refusing to kill Terumi after he defeated him in the end of BlazBlue: Continuum Shift. Ragna spared Arakune's life due to Litchi's pleas, and in his Arcade Mode, he directly references his promise to Litchi to let him live after he defeats him. In the end of BlazBlue: Chronophantasma, Ragna saved Nu-13 instead of killing her and he told Hakumen to not kill her. Also, despite Jin's role in the destruction of his life, still cares for him as a brother. He also expressed anguish when Nu sacrificed her life to protect him, despite the past animosity he harboured for her and later declares he will “save” her due to prior events that shifted his beliefs. This side of his personality becomes more apparent as the story progresses, though he still keeps a rough exterior around others that don't know about his soft side.

Later on after the events of BlazBlue: Chronophantasma, Ragna goes through more personal development which changes his opinions about the reasons he fights. He starts to rely on his own strength instead of the Blue Grimoire, as its power is to “steal” instead of “protect”. He declares that he will no longer fight to destroy and for revenge, and instead, decides to fight in order to protect his loved ones. This as aforementioned extends to Nu where he declares he'll save her instead of destroying her.

Ragna is one of the main protagonists.

Ragna is one of the playable newcomers in PlayStation All-Stars: Round 2 - Extra Edition. His rival is Sol Badguy from Guilty Gear Series.

Ragna is one of the playable characters in Big Fighting Game Crossover.

Ragna is one of the Season 2 characters in Death Battle: The Video Game.

Ragna appears as an unlockable playable character in Jake's Super Smash Bros., with many of his attacks from the BlazBlue franchise being recreated for his appearance in this title. Like in BlazBlue, several of Ragna's attacks can heal him should he successfully hit a foe with them.

Ragna appears as a Pair Unit alongside Sol Badguy from Guilty Gear series.

The events of the game canonically takes place after the events of BlazBlue: Centralfiction.

Ragna first appears in Chapter 13: Fearsome Warriors, he wakes up in the Fujisakura Altar (Super Robot Wars OG: Endless Frontier), as he gains conciousness, he starts recognizing he has been restored but he's not on his world. Immediately, he is found by Sol Badguy, who was holding a wanted poster of him, Ragna is then surprised on how the bounty hunter got to recognize him as quick as Celica. The discussion quickly becomes a battle between the bounty hunter and the SS-Class rebel, but during their match, they got ambushed by a group of Aragami, forcing them to join forces to destroy them. After the retreat of many foes, Ragna and Sol decided to forget their rivalry temporally and join Shinra's group.

Ragna is one of the DLC characters in the game. 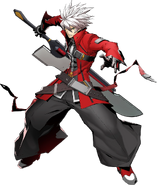