Rachel Alucard (Japanese: ラケル＝アルカード Rakeru Arukādo) is one of the main protagonists of BlazBlue franchise, debuting on BlazBlue: Calamity Trigger as a playable character.

Rachel is a stereotypical aristocratic heiress. She has an almost enchanting air of dignity and grace, yet is sarcastic and condescending to those she considers lower than her, always expecting them to have the highest standards of formality when conversing with her.

Despite this, she does care deeply for her allies. Her butler, Valkenhayn, is fervently devoted to Rachel, as he was a loyal friend and respected rival to her father, the late Clavis Alucard, and she, in turn, treats him with a greater level of respect than anyone else. Rachel’s two familiars, Nago and Gii, despite taking punishment from her on a regular basis, remain loyal to her.

Perhaps her most intriguing relationship is with Ragna. Although Rachel would never admit to it, she loves Ragna for his determination and unwillingness to give up even when the odds are against him, wanting him to reach his full potential as a warrior and as a person. In BlazBlue: Centralfiction, her feelings for Ragna become more evident as revealed in her arcade mode. She becomes even more concerned when she finds out that Naoto’s existence is affecting Ragna. This is most notably the only time she lost her composure. In the end of the game, Rachel sheds a tear over his large sword, despite forgetting Ragna.

Rachel is one of the game's secondary main protagonists.

Rachel appears as an NPC, despite being not playable, she alongside Fio and the shopkeeps plays a major role in the story as supports for the player's party.

After the events of Central Fiction and prior the events of the game, Rachel notices that the world is becoming unsteady, not much later, she notices a power who was suppossed to be stopped for good, her memories of Ragna and the events that ocurred in his final battle with Terumi came back and immediately grabs Ragna's Aramasa, successfully finding him afterwards and bringing him back to existence for a brief period.

When Charlotte Aulin first meet her near the half of the game, she thought Rachel was related to Dracula and Alucard's bloodline until she reveals that she's from another dimension.

In the final chapter, she join forces with Chizuru Urashima and Fio Germi to keep the world safe for their allies to have a chance to kill Saya for good.

When Terumi is killed once more, she extends Ragna's period until he and the group destroys Ouma and Galamton once and for all.

With Ouma and Galamton finally killed and the battlefield collapsing, the trio managed to teleport our heroes to a safe place with some help from Mii Kouryuuji's Kouryuuji Clan's secret technique.

Although she hasn't teleported Ragna back to non-existence at the end of the game, she mentions to Reiji and Xiaomu that she'll be taking a break along with the rest of the team in New Zack Island before that, just to get her juice accidentaly dropped by Ling Xiaoyu when she was playing cricket alongside Kasumi, Valkyrie and Fio Germi.

Rachel appears as a Support Spirit. 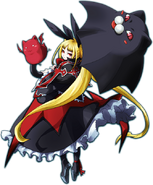