Rabbid Mario is a Rabbid dressed as Yoshi that appears as one of the 10 playable characters in Mario + Rabbids Kingdom Battle, wearing a suit resembling him, though with the nose on his forehead and the saddle being made out of a button. He was supposedly created when Spawny used the SupaMerge to fuse a Rabbid with something Yoshi-related. In the game, he teams up with the other playable characters to save the Mushroom Kingdom from Rabbid-infused enemies and Bowser Jr.'s attempted takeover.

Like other Rabbids, Rabbid Yoshi is playful, reckless, and mischievous, though he's even more hyperactive, tending to make brash decisions without thinking of the consequences. He has crossed eyes and pulls a variety of weird and exaggerated facial expressions. He also keeps his weapons in his mouth, spitting them out when he uses them. Rabbid Yoshi also appears to be trigger happy, firing his Rumblebang at Calavera despite the battle being over.

Rabbid Yoshi debuts in Mario + Rabbids Kingdom Battle. He first appears in Spooky Trail, where he is held by a large vine in a well. He is then pulled down as Calavera rises from the well, holding him as he battles the heroes. Throughout the battle, he will use Rabbid Yoshi as a weapon, making him spit bombs that can damage Mario and co. Once defeated, Rabbid Yoshi is freed from Calavera and joins the heroes in their adventure.

Rabbid Yoshi is classified as a "Boomboomer", having average mobility and defense, and great offense. His primary weapons are Rumblebangs, gatling gun-like weapons that can fire multiple shots at enemies and increase the likelihood of inflicting them with status ailments, and his secondary weapons are Grenaducks, duck-shaped bombs that don't deal much damage but can be lobbed over cover. Rabbid Yoshi can use Ultra Dash, where he can dash into five enemies in a single turn. Like other Rabbids, he can also use a shield, his being Outer Shell, which can shield him from any physical or projectile attacks, but is broken if he is damaged once. He can also use Scaredy Rabbid, where he screams loudly and pushes enemies away from him. 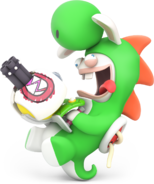