Rabbid Mario is a Rabbid dressed as Mario that appears as one of the 10 playable characters in Mario + Rabbids Kingdom Battle, wearing his cap, mustache, and overalls. He was created when Spawny used the SupaMerge to fuse a Rabbid with a replica of Mario's hat. In the game, he teams up with the other playable characters to save the Mushroom Kingdom from Rabbid-infused enemies and Bowser Jr.'s attempted takeover.

Rabbid Mario debuts in Mario + Rabbids Kingdom Battle. Aside from the opening cutscene which briefly details his creation, he first appears in Sherbet Desert, frozen in a block of ice. After being found, he is then carried by Toad, and Mario and co. lead him back to Toadette and use the frozen Rabbid Mario to open a gate. This reveals Bowser Jr., who uses Spawny to create Blizzy and Sandy. Once they're defeated, Rabbid Mario breaks out of the block of ice, and joins Mario and co. on their adventure.

Rabbid Mario is classified as a "Brawler", sporting great offense and mobility, but poor defense. His primary weapons are Boomshots, shotgun-like blasters that fire in a spread and can heavily damage enemies (and allies) the closer they are to him, and his secondary weapons are Melees, hammers that deal the most physical damage of any weapon in the game, but require him to be next to an enemy to use. Rabbid Mario also has a passive ability called Boom Dash, which can cause an explosion when he dashes into an enemy and damage other enemies in the blast radius. Like the other Rabbids, he can also use a shield, his being Bodyguard, which offers defense against physical attacks. He can also use Magnet Dance, which will draw nearby enemies towards him, likely allowing Rabbid Mario to deal more damage with a Boomshot or Melee.

Rabbid Mario appears in Raving Rivals as a main playable protagonist. His action command is X and teams up with Rabbid Luigi to save the Mushroom Kingdom. However, as Raving Rivals is a prequel to Kingdom Battle, Rabbid Mario is seen to have a grudge against Mario and battles him frequently. 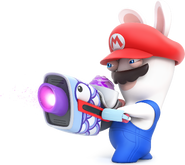 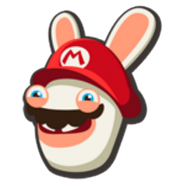