“Rabbid Luigi is a defensive specialist who can leverage the unpredictable elemental forces that surround us all to great strategic effect.”
— In-game bio, Mario + Rabbids Kingdom Battle

Rabbid Luigi is a Rabbid dressed as Luigi that appears as one of the 10 playable characters in Mario + Rabbids Kingdom Battle, wearing a green sweater as well as his hat, albeit turned to the side. He was supposedly created when Spawny used the SupaMerge to fuse a Rabbid with something Luigi-related. In the game, he teams up with the other playable characters to save the Mushroom Kingdom from Rabbid-infused enemies and Bowser Jr.'s attempted takeover.

Like other Rabbids, Rabbid Luigi is playful, reckless, and mischievous. However, he also shares traits with Luigi, being easily frightened, clumsy, and preferring to avoid conflict. He also seems to be more polite and courteous than his fellow Rabbids, though still shares their love for mischief and chaos.

Rabbid Luigi debuts in Mario + Rabbids Kingdom Battle. He and Rabbid Peach are among the first Rabbids Mario and Beep-0 meet, and are quick to join their adventure in saving the Mushroom Kingdom from the fused Rabbids and Bowser Jr.

Rabbid Luigi is classified as a "Wizard", having low raw damage, but specializing in inflicting status ailments. His primary weapons are Bworbs, ranged weapons that don't deal much damage, but also have the widest range of status ailments of any weapon type in the game, and his secondary weapons are Rockets, RPG-esque rocket launchers that can cause explosions and damage enemies in the blast radius. Rabbid Luigi can use Vamp Dash, which can inflict the Vamp status on an enemy. Like other Rabbids, he can also use a shield, his being Super Barrier, which can protect him from status ailments. He can also use Weaken, which briefly weakens the attack power of nearby enemies for a short time.

Rabbid Luigi also appears briefly in the intro cutscene for the Donkey Kong Adventure DLC expansion, where he alongside Mario and Luigi witness Rabbid Peach and Beep-0 getting transported to Donkey Kong Island by a corrupted Time Washing Machine. 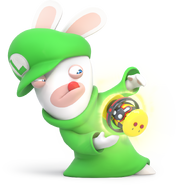