Quetz is surprisingly young-minded for a person her age; due to her simple upbringing with the harpies, she has the mind of a nine-year-old at nineteen years old. She is easily surprised, highly curious, and a bit hyperactive. She does possess reasoning and logic skills within her normal age group, but otherwise seems younger than she actually is.

Quetz is also highly athletic, even for a harpy, and possesses an innate sense of heroism rare among her race. Even so, her greatest flaw is her attachment to her friends and family, having a deep-rooted phobia of abandonment.

Quetz was born as a human in Sana Tomas, one of the islands in the Crypta Archipelago. She was given by her original parents as an offering to the harpies, protectors of the island chain, at the age of two. Upon arrival at the harpy nest, a massive mountain at the center of the archipelago, she was transformed by her new family into a harpy, and has been raised for seventeen years alongside the avian creatures.

Eventually, a group of esteemed hunters arrived from a far-off land, led by a man named Clayton Columbia. Originally sent to the archipelago to capture a single harpy for scientific purposes, he decided to capture all of them, and nearly succeeded were it not for missing Quetz. With the islands now in peril, she set off to save her family from the hunter.

Though Quetz doesn't physically appear in Super Smash Bros. Crash, her amiibo is compatible with the game. By scanning it, one can unlock an alternate costume based on her for Petey Piranha to wear. He wears a full-body costume based off of her, as well as wearing her clothes, a belt with tail feathers on the back of it, and talons taped on his feet.

Though Quetz is not physcially present in Stampede Breakfast 2, Petey Piranha has an alternate costume based on her. It is identical to his Quetz-inspired costume in Super Smash Bros. Crash, although the talons are absent.

Quetz makes an appearance in Ghostrealm Heroes as an Assist Character. When summoned, she will attempt to attack opponents from midair, dealing more damage if she's above them. 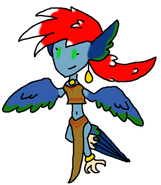 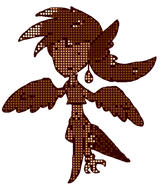 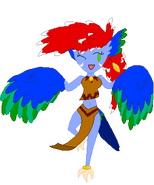 A sketch of Petey Piranha wearing a Quetz-inspired costume 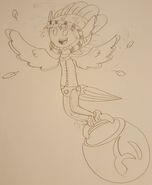 Halloween-themed art of Quetz in a Petey Piranha costume. 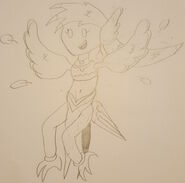