Queen of Liars is a role-playing styled poker game developed by Illusion Works and released as a launch title for the Pacifico on November 18, 2016. It features a girl called Prudence, who becomes obsessed with an online poker game. She learns that to win in the complicated and mischievous game of poker, she will need to master the fine arts of lie and deceit to become the best poker player in the world, and thus she unknowingly develops psychological problems, which ultimately lead to further challenges in her life beyond the addictive video game.

After being bullied in the real world, Prudence took to the online cyberspace. She stumbled upon a poker game online, and decided to give it a shot. She started playing and quickly became addicted in the game.

Soon after joining, she meets a user called Myles_The_Great, and they become friends. Myles tells Prudence about the League challenges, where good poker players go against more professional players in a regulated tournament of wits and lies. Prudence becomes excited, but Myles then tells her that her first opponent would be him, which troubles her. She prepares herself for the battle, and manages to win easily against Myles.

After the match, Myles introduces Prudence to his friend, JessicAviator, another League Leader. They all become good friends, and decide to all participate in Jessica's League battle. After an intense match, Prudence manages to win barely, making Jessica and Myles very excited for her. They decide that they should train together for further League matches, which Prudence happily agrees to.

The next League match is Moon, but before the match the group only just learns about Moon's exclusive Chaos Chip, and go into the match unprepared. After a hard battle, they manage to defeat her, and a strange figure congratulates her afterwards. The team decide to take on the Hammer League as soon as possible afterwards, and Prudence barely wins once again.

Moon meets the three after the Hammer League match, and informs them that they should definitely slow down with the matches, otherwise they could be disqualified from the league due to rigging or cheating. She also informs them that the Final League watches all participants, and if they believe someone is moving too fast, they will somehow remove them from the game. Prudence listens to her, and instead decides to learn more about Chaos Chips and their functions.

A few days later, Prudence and the group decide to enter the Horse League, however, they are told before they enter that all matches in the Horse League are one versus one, so they will have to take turns. Myles goes first, but loses against the League Leader. Jessica goes next and barely wins the match, leaving Prudence to go last. After learning about a fairly new Chaos Chip, she manages to easily win against the League Leader.

Next is the Lion League. She enters the match, however, one of the enemies plays an Hourglass chip, which slows down the game. Jessica manages to find a Gear chip, and plays it to make time go quicker, allowing them to win the match quicker. Lionheart meets them after the match, and informs them that the next League is significantly harder than his, due to the Leader being of a Legendary ranking.

In the Snake League, !KillerKobra! plays an Infection Chaos Chip on Myles, making him play weaker. He then plays a Compass Chaos chip, and unknowingly it points to Prudence as the biggest threat. In panic, Prudence plays a Bloom Chaos chip to shield her cards, and then her and Jessica use other chaos chips to stop him, and they very narrowly win. Myles apologises for his stupid error, and the group forgive him.

The Eighth League, Thorn. ATelltaleRose plays a Rose chip on Prudence, hoping for negative consequences in the match. Prudence uses an Oracle chip, but Rose counters with a Thorn chip, making Prudence stunned. Jessica uses a Clown chip on Prudence before using a Flame chip on Rose's thorn. After some more heated turns, Jessica manages to win the match for the group.

The Final League match begins for the group, against a user called "...unknown...". The group couldn't find any information on his play style or what Chaos chips he uses, but they proceed regardless. Unknown uses a Keychain chip on Prudence and Myles, locking them together. Jessica uses her Oracle chip, and notices that Unknown has a chip which she has never seen before. She begins to worry, and Unknown plays a Chaos Chip called the Death Chip, startling the audience and other players, before they use it on Prudence. Jessica quickly uses her Balloon chip, and bounces the effects of the death chip onto Unknown, thus defeating him.

Jessica becomes the new League Champion due to dealing the final finishing blow. Prudence and Myles congratulate her, and they decide to meet up in real life. The three meet up, and have fun together. The game closes showing many pictures of the three together, showing that Prudence have overcome the bullying and loneliness she once faced. However, the final picture shows Prudence's avatar, Queen of Liars, before saying "The End".

After completing the story as Prudence, you gain access to the character customisation feature, allowing you to make your own avatar and username to play as. You have to complete the League challenge again, however new enemies will emerge as some time has passed since Jessica won the league.

The final boss of the Post-Game is Queen_of_Liars, Prudence's avatar. You have to finish the battle in the same way, as Queen_of_Liars gained access to the Death Chaos Chip. When Queen_of_Liars is removed from the game, you win the League. There is one final hidden boss, which is facing against all of the League Leaders in one poker game, in order to achieve Mythical Ranking.

Queen of Liars works exactly as it would if you were playing an online poker game. You begin the game as Prudence, a new inexperienced player on the site. Through playing games, you earn more cash and experience based on the outcome of the round. The story progresses upon level ups, which allows you to meet new players in the game, learn more information about them, and figure out a way to deceit your way to the top.

When you reach level 10, you're able to participate in more professional poker games. You can then take on the League challenges, and defeat different factions in order to become the best poker player. You will have to defeat members of a league before being able to take on the king or queen head on. Each league has specific requirements to be able to participate, and each have a specific theme which will help you win.

Chaos Chips are unique specialised poker chips which grant players new abilities and powers. Every Chaos Chip has an effect which could drastically change up the game, and some players, like kings and queens, have their own specific Chaos Chip to play. Also, some chaos chips have upgraded versions of themselves which may add extra effects or increase the effect of the previous version.

Leagues are different parties in the poker game. Each league has a king or queen that Prudence will have to beat eventually, and when the leader is defeated, the alliance as a whole are eliminated and removed from the game.

Premium Poker is the name given to the Story Mode of Queen of Liars. In the story mode, you play as Prudence, an antisocial girl who was bullied in her real life, who has turned to the online cyberspace to find some comfort and fun. Prudence joins a poker game, and quickly becomes emmersed in it, meeting friends, rivals and enemies pretty quickly.

As Prudence, you will take on the Poker League challenge, where you face off against nine different leagues to ultimately become a Legendary poker player.

Free-Play Mode is the secondary mode of the game where you can play any of the poker games without time constraints and other options in the story mode. You can also pick the difficulty of the game in this mode.

Online is a mode where you can play any of the poker games online with friends that you have registered on your Pacifico console.

The Dressing Room is where you can customize your character after completing the game as Prudence.

Roulette Room is a mode where you can play games of Roulette with the money you've earned throughout the game. Roulette can help you to unlock new achievements you may not have yet, and other awards like Trophies which you might not have unlocked yet.

Trophy Room is a room where you can view your trophies and your legacy in the game of poker. You can also set a trophy to be your prized trophy which will be shown off to other players around the world when they click on your profile.

The game has been positively received so far, despite the lack of development in recent times. The game is rated "M" and "18" due to the themes of the game being dark and mature, as well as protecting younger children from becoming addicted to gambling. 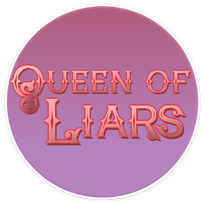 Queen of Liars Pacifico application
Add a photo to this gallery

Retrieved from "https://fantendo.fandom.com/wiki/Queen_of_Liars?oldid=3012612"
Community content is available under CC-BY-SA unless otherwise noted.