Queen Nebula (full name Nebula Lusional) is the main antagonist of the Shadowcalypse series. She is the goddess of stars, and the only female member of the interstellar oligrachy ruling the galaxy.

Queen Nebula hates her own species (i.e. humans) because she believes they are a weak race that only cares about their own demands. She wants to take over the universe to change this, so this may mean she is not entirely a villainess, and only wants to increase the effectiveness of the human race. However, Nebula plans to use her creation abilities to recreate the universe in her own image, meaning that she plans to increase humans' productiveness in a sadistic manner.

Queen Nebula has long, thick brown hair that falls past her waist, pale white skin, and a light purple dress. She has hazel eyes that show almost no emotion at all.

Nebula hates Umbra because he is a threat to her plans. Thus, she tries to destroy him at all costs.

As her sister, she seems somewhat protective of her despite not having seen her in a long time. She and her sister grew up together but where as Queen Nebula grew up to hate the human race and it's weaknesses, Dee Lusional grew up to hate the universe itself and desired to create her own. After hearing the legend of Spira, Nebula states that she never saw Dee ever again... until now.

Although she is against her plan, she also does not wish to destroy Dee and makes it clear to the group that they are not to kill her or harm her if they want her help.

Nebula as drawn by Trucky (t∣b∣c). 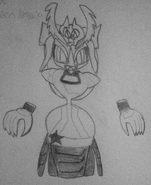 Nebula's Face Off art.
Add a photo to this gallery
Retrieved from "https://fantendo.fandom.com/wiki/Queen_Nebula?oldid=3182520"
Community content is available under CC-BY-SA unless otherwise noted.