The Pyrohedron is a gaming console created by Pyro Enterprizes with design assistance from Nintendo. It is designed to be similar in structure to the Playstation 4 or V2, lacking any central gimmick and simply focusing on high-quality software over hardware. In addition, it also aims to bring many PC gaming qualities to the console market, such as allowing software modding (even possessing a store for mods specifically), built-in streaming capacity, and a Steam-like market to allow more developers to share their games with the world.

It was released in mid-2022 and was launched with three first-party titles- Heroforce, Mythikal, and Eclipsa- as well as several third party releases. Reviews praised the console for bringing quality software to consumers and for its relative low price point compared to similar products, but was criticized for not standing out much due to its lack of gimmicks and simply being a "plain console".

The physical console of the Pyrohedron is a typical rectangular shape, approximately the size of a PlayStation 4. It appears as a simple block like most modern consoles, with a disc drive in front as well as buttons for Power, Eject Disc, Reset, and Connect, a feature which connects the console to the nearest accessible WiFi source. 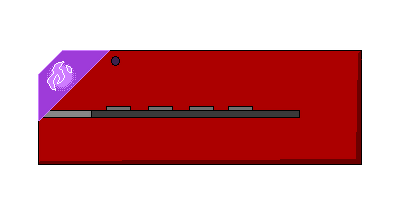 The Pyrohedron controller is very similar in shape to a Playstation or Xbox controller, but is sleeker and closer in design to a Wii remote. 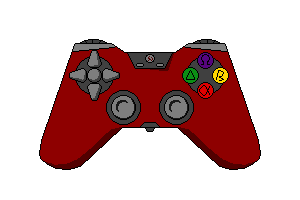 and a mouse-like scroll wheel

, known as a "Scroll Bar". The right side has a set of four circular buttons buttons that form a square listed as the Alpha

buttons (or the Command Buttons), another circle pad (referred to as the R-pad)

The center of the controller has three more buttons, two of which are ellipses labelled Start and Select, the third being a larger button that simply has the Pyro Enterprises insignia, known as Home

. Start and Select have a variety of uses per game, though Start is usually used to pause the game and Select usually cycles through an option of some kind. Home pulls up a small menu when pressed, which enables users to return to the main menu, activate one of several streaming apps, or deactivate the console.

On top of the controller is a variety of slots, including a headphone jack, charger inlet, and a connection slot for the detachable 8"x5" touch screen. 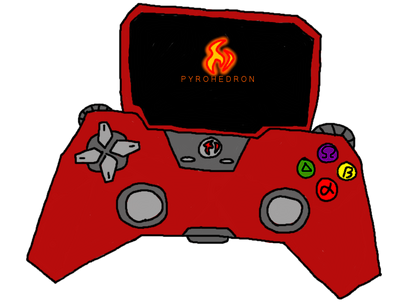 This pretty much acts exactly like how you think it would on a console. You can surf the web, search stuff on your choice of browser, or even edit on Wikia via a modified source editor.

A digital market akin to the Nintendo eSHop. The eStore is divided into three categories: Games, Trials, and Updates.

A list of games that can be purchased can be seen here.

Any page that has Category:Pyrohedron Games on them will be added here automatically.

Logo for the console.