Pyra is one of the main female protagonists in Xenoblade Chronicles 2.

Pyra has short neck-length red hair, red eyes and fair skin. She wears red "battle armor", which consists of a armor piece around her breasts, although around her waist it seems to give up and just expose her sides. She wears seemingly uncomfortably tight high-waisted shorts that have loops around it. She wears knee high red plastic-looking socks and red boots. To top this off, she wears a tiara.

Despite being known as one of the most dangerous Blades in history, Pyra is a kind-hearted, soft spoken young girl who desires peace among both Blades and Drivers. Despite being gentle around people, she is not afraid to fight and will do so when the people she cares for need her help. Despite her bright smile, Pyra is very doubtful of her worth and still feels guilty from her past mistakes.

Pyra in Super Smash Bros. Sunburst and Moonlight and Nintenexus. NOTE: Her outfit was slightly altered. 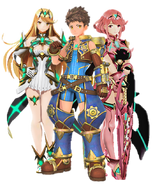 With Rex and Mythra
Add a photo to this gallery

Retrieved from "https://fantendo.fandom.com/wiki/Pyra?oldid=3236956"
Community content is available under CC-BY-SA unless otherwise noted.