View source
“Mario, you want a piece of me? 'Cause I'm collecting pieces from you!”
— Pyotr

Pyotr I. Koopa is a big Koopaling, and his name is based off of Pyotr Ilyich Tchaikovsky, as most of the Koopalings' names are based off of musicians or celebrities.

Pyotr was originally nice until Roy came along and taught him to be evil. Now he likes to steal from his enemies, and sometimes works with Roy or Larry to steal something or fight the Mario Bros.

He is a playable character in this game he is unlocked when you complete Lava Land with Roy. He has special powers in this game like flutter jump, head butt, steal power-up and even graffiti.

Pyotr appears as a starter character with Lavora in this game and must work with her to save all the Koopalings and get Bowser's Big Book of Plans back! In this game, his special powers are magic (standard), stealing power-ups (super), and his paintbrush (mega).

Pyotr pretends to serve Bowser because he wants to take Bowser's spot some day.

Pretends to help him because of same reason as Bowser.

He often steals Mario's power-ups. (can be tricked if you have a Poison Mushroom in inventory).

Same as Mario, but he does not steal Super Leaves or Poison Mushrooms if you are Luigi.

Serves (Bowser Jr. told him Peach was their stepmother).

Isn't fond of, but still helps because she is Peach's friends.

Likes riding him by stealing him from Mario or friends.

Likes squashing, even though they are Peach's servants.

Pyotr has a green Mohawk that covers one eye, apparently blue eyes, and a red shell. He is also a large Koopaling. 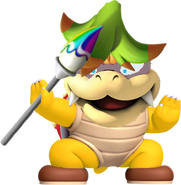 Pyotr's third look (Made by Peanutjon based off of second artwork) 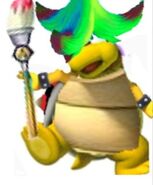 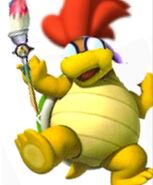 Pyotr's First Artwork (Notice his hands are different, his shell is green without spikes, his body is more like a Sledge Bro, he has Bowser Jr's hair, and his hair doesn't cover eyes)

Pyotr with his long hair*!!!