Putrid Piranhas are a variant of Piranha Plant that appear mainly in the Paper Mario series. They initially appear in Paper Mario, where they looked like larger Piranha Plants that faced forward rather than standing upright, encountered in Jade Jungle on Lavalava Island. Unlike normal Piranha Plants, they can be jumped on because of their stance. They have two attacks, in which they can bite to damage Mario or spit poisonous breath, which deals less damage in exchange for inflicting lasting poison on him.

Putrid Piranhas return in its sequels Paper Mario: The Thousand-Year Door and Super Paper Mario. In these games, they sport a different coloration, having a yellow head with red spots, green lips, and purple teeth. They stand upright like normal Piranha Plants unlike in Paper Mario, so they cannot be jumped on. In the former, they are encountered on Keelhaul Key, and their poison breath can damage both Mario and his partner as well as inflict poison. In the latter game, they are encountered in Downtown of Crag, Gap of Grag, and the Floro Caverns. Like other Piranha Plants in the game, they only appear in Warp Pipes and will spit poisonous breath. It is possible to jump on their heads while they are attacking.

In the Super Smash Bros. series, Piranha Plant's side special, Poison Breath, is based om the Putrid Piranha. Its head will turn into a Putrid Piranha's as it charges its breath, before releasing a cloud of poison in front of itself. It deals no hitstun, but it does deal constant damage.

Putrid Piranhas appear in Super Mario Allies as enemies. They spit poison breath when Mario is nearby, which can damage him. He can use Cappy to F.L.U.D.D.'s water to clear it.

Putrid Piranhas can also be Captured with Cappy. As a Putrid Piranha, Mario can spit poison breath in any direction, which can not only defeat enemies but also cause obstacles like ropes and trees to rot and wither away. However, Mario cannot move from the Putrid Piranha's spot. 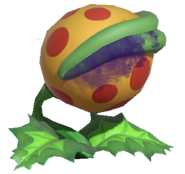 Add a photo to this gallery
Retrieved from "https://fantendo.fandom.com/wiki/Putrid_Piranha?oldid=3156598"
Community content is available under CC-BY-SA unless otherwise noted.