Purple Guy is the signature character of Purpleverse Inc.. He makes an appearance in most titles by the company, and is generally portrayed as a heroic character. He made his first major appearance as character in Neverworld The Second.

Purple Guy will appear in the upcoming game Trinity, alongside Unten and Toad.

Purple Guy appears as a playable character in the upcoming Dark Purple, a game by Black Diamond Games.

He is an NPC in Purple Beary Bros. where he arms you with the Purple Sword and the first power ups of the game.

Purple Guy appears in the game Nightwolf Purple Platinum as a playable character once you enter the "Purpleverse" half of the game.

Purple Guy appears as a playable character in Mario Party 11. He is working with Brigade Toad and the best thing he can do is control the dice to land on a number he wants either a person is playing as him or a computer is playing as him.

Purple Guy will appear in Neverworld Rift. Little is known about his role at this time. 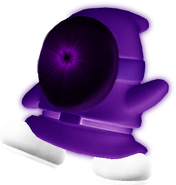 Hyper Form by Shadow Inferno (t∣b∣c)
Add a photo to this gallery
Retrieved from "https://fantendo.fandom.com/wiki/Purple_Guy?oldid=2380345"
Community content is available under CC-BY-SA unless otherwise noted.