Puffball Party made by Endgame Enterprises.
Do not edit without Dick's permission, <insert your name here>. If you edit this page without permission, you'll be warned on your talk page. If you want to edit it, go to his talk page and ask him if you can edit this page. However you can add categories and fix minor errors in Puffball Party.
JUST REMEMBER THAT Puffball Party IS OWNED BY BRANDON JAY DICK, IF YOU MESS UP EVERYTHING, I WILL WARN YOU! OKAY PEEPS? OKAY!
Without further ado, enjoy the game. Any criticism is permitted here, FYI!

Puffball Party (also known as Popopo Party or Puffball Panic, ぷっｆばっｌ ぱｒｔｙin Japan, Puffball Partido in Spanish, Puffball Parti in French) is a game developed by Endgame Enterprises and published by Fantendo and HAL Labortory. The game itself is Kirby and Mario Party combined, but with different features. It features Kirby and his buddies, even his rivals teaming up to destroy an evil being (which is Nightmare).

There are ten boards to play on (half of each are available at the start and unlockable) and the gameplay from Mario Party 9 comes back. The party participants have to go through boards in a cart and reach the end with the most star points to become the Superstar. There are yellow stars which give 1 star point, green stars which give 5, red stars give 10 and blue stars give 30. Black stars decreases star points, so don't try and get one.

Kirby and his friends are playing somewhere on Popstar until the sky turns pitch black. They realized something is terrible happening again in this planet. Kirby goes on an adventure to save Popstar once again. Not only he went alone, some of his friends, even his rivals came to help.

In this mode, you can pick a character to play with and go through ten boards to get the most star points to move on. You'll face against three, two or one enemy(ies) (depending on what stage you're in). If the enemy gets more star points than you, you'll get a Game Over screen and you have two options, quit or continue. If you click continue, you'll restart the stage. If you click quit, you'll lose all you're progess (unless you save) and go back to the main menu. After beating 9 stages, you'll go on a solo adventure to get more star points for the end, where you face the final boss. Beat the boss and you beat Story Mode and unlock the stages that are not available at the start. If you beat Story Mode with all characters, you unlock Hardcore Mode where you face enemies with a higher difficulty.

In this mode, you can play all by yourself and play on boards. You can pick one character and faces a number of CPUs you picked. If you win a board, you get more star points in total.

In this mode, you can buy minigames with star points to play. If you buy ten minigames, you can play on Minigame Stadium, where you can duel with your friend or a CPU or battle with your friends or against CPUs. You can look at the records of minigames as well.

In Collections you can look at all the star points you have earned and all the stuff you bought. You can buy other stuff here too.

In Extras, you can play all by yourself in Puzzle Minigames and get star points easily.

DLC Characters can be recommended by you guys. If you want to recommend someone, ask me in my talk page, not in the comments. 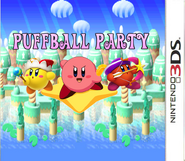 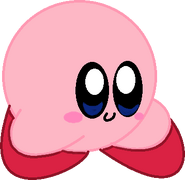 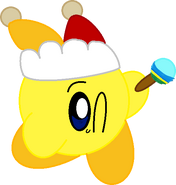 Redby's artwork.
Add a photo to this gallery

Retrieved from "https://fantendo.fandom.com/wiki/Puffball_Party?oldid=2626868"
Community content is available under CC-BY-SA unless otherwise noted.