Psychological is a free-roam game that was originally announced for Hybrid Δ by Gearworks Gaming before being trapped in developmental hell for two years. It was later picked up by Toroko and announced for The V². The game revolves around a prisoner suffering from mental breakdown after days of being brainwashed in a mental facility. The game is inspired by the Japanese game LSD Dream Emulator.

You are a prisoner, arrested for being somewhat involved as an accessory to your friend's crime of murdering his relatives. Your friend suffers from the death penalty, though you are in more luck as you are not killed and only sentenced to a single year in prison. You are taken to the prison only to be taken to a single solitary room, padded and lit by a single hanging light. The door is made of iron so there is no guaranteed way of escape, and there is a small metal table, with latches attached to them. They attempt to place you on, and bring in an electric device and place it on your head. You are shocked by the electricity, and they attempt to manipulate the thoughts with this in mind. They fail, and decide to leave you be. You're traumatized by it, an proceed to spend your year on the brink of insanity.

Here is a list of all major days which take place ingame. The events on these days can sometimes change depending on the actions you do in the previous few days.

The game takes into account a day system, which starts at Day 1 and ends at Day 365. For each day, there are 2 modes, the Reality Mode and the Dream Mode, each of which have details listed below.

Reality Mode is the first segment which takes place each day in the Prison. During the Reality Mode, the player can interact with objects and prisoners around him/her and inspect them. In Reality Mode, you can pick up objects which can be used for its actual purpose or to attack any hostile prisoners with. The Reality Mode will usually end either when you ask to go back into your cell or after the prisoners are cleared out from the area. As the days go on, Reality Mode tends to be more of a name than an actual representation of the reality of your situation.

Dream Mode is the second segment of each day, which takes place in different scenarios. Each scenario will differ more each time in terms of weather, textures, events and any existing NPCs. The player can interact and inspect objects like in Reality Mode, however more objects are available in dreams. As the game goes on, more surreal events will occour in Dream Mode and things which resemble reality will make less sense. Some of these include Floating Islands, segments which have been broken into a black void, Dead Walkers outside the Mental Asylum scenario and other things. The Dream Mode will end either when you die in a dream or the time in a dream ends. It will then become the next day and Reality Mode will commence.

Scenarios are areas where most dreams take place and are the base of each dream. As the game progresses and the player becomes more insane Scenarios may merge with each other and have different weather or timing.

Events are occourrences which happen in dreams which make each of them unique, ranging from a simple street fight between NPCs to floating islands and Voids. A list of them can be found Here.

An NPC is a Non-Playable Character. In Psychological, a variety can be found and as the player becomes more insane, more will be uncovered. Here is a list of all the NPCs appearing ingame. 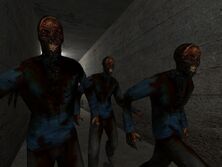 Several Dead Walkers running in the Mental Asylum
Add a photo to this gallery
Retrieved from "https://fantendo.fandom.com/wiki/Psychological?oldid=2254048"
Community content is available under CC-BY-SA unless otherwise noted.