Psychedelic Taco is an umbrella fighting game created by Revelation Heroes Entertainment for the Nexus, Knuckleduster and Pharo. It is a perfectly average umbrella fighter with absolutely nothing strange happening at all.

Artistically, the game is inspired by dreams and the bizzare results they can produce, with many characters displaying more vibrant colours than in their source material to highlight the ethereal world in which they now exist.

The majority of Psychedelic Taco's gameplay is drawn from the Super Smash Bros. series, but with health bars over the traditional percentage meters. Players must defeat opponents by lowering their health bars to zero. However, when a health bar is empty, the player is not immediately eliminated. Instead, they become open to finishing moves from other players. The further below zero their health, the more effective the finishing move is. Eliminating a player scores a point for whoever eliminated them.

Traditional blocking mechanics are used instead of the shielding system from Smash. Against a blocking opponent, the majority of special attacks deal chip damage, but only certain specials and grabs will break blocks completely. Additionally, each player chooses an Ally after choosing their character. Each player has two charges for summoning their Ally in combat, which will cause them to appear and aid the player. Ally's have their own, small health bar, but unlike player characters they are defeated as soon as their health reaches zero, or they will leave after thirty seconds on the stage. Ally charges can be regained from certain items or by depleting the Reality meter.

The cast of Psychedelic Taco is designed to be diverse, with a variety of characters from different franches. Combat in Psychedelic Taco is fast paced, with design that encourages quick brawls interlaced with quiet moments of recuperation. Characters also have incredible jump height and noticeably 'float' in the air, descending slowly but without the vulnerability state after attacking present in Super Smash Bros, essentially being able to fight normally while airborne, albeit with limitations to their moveset (namely, abilities that move the character may only be used once while airborne, with some exceptions). Stages in Psychedelic Taco are also designed comparably to those of Smash Bros, with floating platforms and a variety of stage hazards, but are often smaller than those of Smash Bros, with very few larger levels.

There are multiple modes in Psychedelic Taco, with new modes occasionally being added in updates.

Dreams of the Dreamer

The Dreamer's Dreams are the characters who were drawn into the world of Psychedelic Taco by the dreamer himself. They are the basis of the Dreamer's creation and thus are vital to the world itself.

The Manifestations of Chaos are the Dreamer's nightmares given name, soulless husks created by the Chaos to extend it's reach within the world of Psychedelic Taco. Despite their nature, the manifestations sometimes show personality and character.

Any player may summon an ally to fight alongside them for a brief period during the middle of a match. They are manifestations of a deeper power, something not aligned with the Dreamer or the Chaos.

Added on the 31st of October, 2019, these five free new fighters were added to the roster just in time for the spooky season. Takeo Masaki, A Drop Bear, Baron Samedi, Susie and Jack Skellington have come out trick or treating!

Psychedelic Taco features a base of 49 stages, with more added through downloadable content. The final boss stage, Psychedelic Techno, is also planned to be added to multiplayer in a free update. Stages come from various properties and feature a wide variety of environments. Many stages feature hazards such as water, NPC enemies, traps, etc. Similar to Super Smash Bros, these stages also feature a number of platforms that can be moved between, making movement a more important part of gameplay than traditional fighting games.

Instead of a single soundtrack, Psychedelic Taco features a number of selectable artists who play their own customisable track list throughout matches. Though the available artists have all had an impact on the creator, their track lists tend to aim for a mix between 'hype' battle music and quieter, more 'aesthetic' tracks.

There are also a few "DJ's" who feature more diverse track lists. Unlike the available artists, each DJ is themed around a specific style or genre. Like the other characters in the game, all the available DJ's are characters that hold importance to RHE.

The Nexus Cover for the game 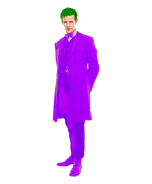 PT, the game's final boss
Add a photo to this gallery

Retrieved from "https://fantendo.fandom.com/wiki/Psychedelic_Taco?oldid=3135191"
Community content is available under CC-BY-SA unless otherwise noted.