Fantendo - Game Ideas & More
Register
Don't have an account?
Sign In
Advertisement
in: Free to use Characters, Females, Heroines,
and 6 more

Proxxy is a Qutamorph born on a planet named Creedus, a beautiful gold and teal terrestrial planet that is known for its beautiful marbled look and its exotic foods and goods.

She is often described as a semi-wild and cool-headed girl that has a heart of gold for the people she loves.

Like all Qutamorph's she is able to stretch and manipulate her limbs into a manner of shapes, tools, and items but unlike most of them, she was born with a rare disability that makes it so that if she stretches out her limbs too far they begin to hurt her muscles and make stretch marks on her skin which is not normal for Qutamorphs in the slightest.

On November 15th a hideous looking creature known as the Voidbound Opheregion was seen floating out in the desert towards a demonic-looking gate that just rose up from the ground, as it got closer to the gate it took out a very disheveled and creepy book, as the demonic creature opened it up, it started chanting a cursed tongue that made the gate violently shake and eventually burst.

As the doors blew off the gate frame horrific-looking blood-red beasts were unleashed onto the surface of Creedus, these were known as Blood-Letters, creatures known for infesting planets and feasting of creatures blood, sweat, and tears until it was cleaned out.

Creedus then tried to retaliate against theses foul beasts but to no avail, they lost and became food for the devilish apparitions.

Proxxy was scrambling to get the hell out of dodge before she was turned into a feast for the damned creatures but they tore into her house and flushed her out onto the streets where she was cornered until something blocked the monsters from getting to her, it was a red bull-like creature that was called the Helkertrite that created a barrier around Proxxy and itself to ward off these creatures so that they could escape and seek refuge.

The managed to find an abandoned mall to hide in, for now, The Helkertrite explained to the now horrified Proxxy that he was an exiled member of the Blood-Letters due to his often non-violent nature and a free will, unlike the hive mind the rest of his kind are.

At first, Proxxy was a bit skeptical of the Helkertrites words and mannerisms as it seemed to be a bit unrealistic to expect even one member of these creatures to show any signs of intelligence or even the little ounce of emotion but she gradually got over that fear with time...even though sometimes she has nightmares about him turning on her and mauling her, she has also had mental break downs revolving around her skepticisms about the Helkertrite.

Proxxy is a tall slender Qutamorph girl with muted green skin, white eyes with black marking around them, 2 curved hands with 3 metallic claws on each of them.

She wears a light blue hoodie that has her astrological symbol on it (Cephoudedus) with the sleeves having 3 holes at the end of them to allow her claws out, she also wears a set of blue jeans with 3 tears in each leg with torn off back pockets giving it a more frizzed look. She also has grey strap-on tennis shoes with red soles and 3 metal spikes on the heels of them.

and lastly, Proxxy has a head shape that resembles a local comet that passes by her planet every year known as the Proxxy Comet, known for its pale green tone and unique shape.

Like stated before Proxxy like all Qutamorphs can stretch and contort her limbs into all forms of useful shapes and tools but she can't have her limbs stretch for too long or else her muscles and skin will begin to tear, the same applies to her morphing her limbs though not as much.

She, unlike other Qutamorphs, was born with Quicksliver Claws allowing her to have a much better grip on objects and makes her day to day life just slightly easier, she has also been learning how to bend mercury and other forms of metal as well but mostly mercury.

Proxxy also has a weird talent that allows her to control the airflow of her pores which can create a vacuum-tight seal around her clothes, making it easier to travel across bodies water but if she does this too much she will get overheated and potentially have a heat stroke due to her sweat glands being closed off.

Lastly, during the events of Demon Tears, she acquires The Crystaline Tear, when she ingests it she can learn and master many of the moves used by the Blood-Letters like being able to bend Blood, Fire and the Minds of beings, along with having an innate power to communicate with the undead but with every great power comes great consequences, when she overexerts herself with these powers or is accidentally hit by a Blood-Letters attack, she goes into a rage like a state where she turns a deep shade of red, grows a set of twisted horns and loses control all cognitive functions, making her into a mindless husk until the effects of this transformation wear off leading to her having to spend multiple hours laying down to recover all of her lost stamina and strength.

As Proxxy's debut game this introduces her personality and her trademark abilities to build upon for future titles to come, in-game she is the most balanced out of all the party members being good at both physical and magical attacks along with being able to tank hits pretty good as well but her biggest drawback hs her low-speed stat meaning that more often than not she will be going last in the turn order only after Kerald who also has a pretty low speed stat

Proxxy also appears as one of the default fighters in Fantendo Smash Bros. Battleground, she utilizes her stretchy appendages to morph them into blunt and sharp objects, turn her hand into a gun that can fire out mercury bullets and is also equipped with her Crystaline Tear and Blood-Letter powers.

Proxxy appears as a playable character in Nintendo & Fantendo: Play Dodgeball, as a member of the blue faction she is a well balanced character that really doesn't spec into on specific stat, her special is called proxxy comet, she coats herself in metal and slams into opponents that knock them down while also launching out earthquakes all over the arena.

Helkertrite is most often seen as Proxxy's "Guardian" so to speak, he will protect her with his life and will allow nothing to get in her way, but on occasion when proxxy messes up he will get quite mad due to his short temper but she looks past all of that along with the fact that he is a blood-letter himself she loves him quite a lot as a protective friend but she has shown her skepticism in the past along with a little bit nowadays.

Phrecelius is a girl with a wild side that contrasts with proxxy's more cool-headed nature, they were at first a bit annoyed at each other but they started to warm up to one another and eventually admitted they had feelings towards each other, and are potential love interests for one another but as of the time of the plot of Demon Tears nothing is 100% confirmed

Kerald is a living breathing store sign mascot that came to life one day, he's a quirky and odd fellow that loves people to death and wants to do anything to help them, he is there for whenever one of the party members is feeling down and wants to cheer them up, proxxy likes him quite a lot but sometimes he can get a bit grating from time to time.

Yvnier started out being a cold and hostile individual who had no interest in Proxxy or her party but the eventually cornered him when he messed up an important task our 4 heroes had to complete in order to ward off the incoming blood-letters in the area, they fought to the death until Yvnier reluctantly gave in and joined their party, he hated the presence of Phrecelius and called her annoying, he almost cracked Kerold's face in half because he was getting annoyed by his constantly nice personality, he could care less about Helkertrite and then with Proxxy, he touted her as a powerless push over and said that "you should've defended yourself you stupid b---h" then one day to really get on her nerves he challenged Proxxy to a fight thinking he could win against her and then Proxxy proceeded to kick his ass, he then got up and ran away into the desert only to be found in the center of a colony of carnivorous plants as proxxy and them saved Yvnier from total brutality, he then realized that he was being too aggressive and that he was going to tone down his temper and that he was going to actually help them instead of hinder them, to this day is is a true neutral character towards everyone but he shows a bit of a softer side towards proxxy though not by much. 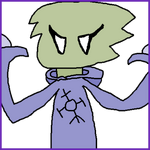