View source
“It's always been on my mind...what it means to be born with weapons in our hands. I haven't found the answer yet, but with the powers you've given me, I will crush your villainy”
— Proto Man, Mega Man: Powered Up
“We've given everything we can. There are no heroes left in man. So let them watch as we decide the very fate of all mankind!”
— Proto Man, The Stand (Protomen song)

Proto Man (also known as Blues) is the "brother" of Mega Man, and the first Robot Master, a prototype, created by Dr. Light. He first appeared in Mega Man 3, and has had several appearances since.

Proto Man was intended to become the first humanoid robot capable of independent thought and reasoning.

Being a prototype robot, Proto Man's design was not complete. It was later discovered by Dr. Light that Proto Man had a dangerous imbalance in his energy core that would eventually kill him. However, being created too independent, not having another of his kind to interact with and severely troubled by his incomplete status, Proto Man had begun growing distrust for the good doctor. Fearing Light would change his character, Proto Man refused to have Dr. Light meddle with his systems and went missing.

Dr. Light had presumed Proto Man to have died and regrettably gave up on him. Learning from his mistakes, he perfected the energy core and created sibling units Rock and Roll. Proto Man's design became the basis of the Sniper Joe series of robots. In Mega Man Powered Up, it is revealed that Proto Man despises the Sniper Joe series due to this.

Knowing the time of his demise, Proto Man wandered the world alone. Before his energy reactor was completely depleted, he was found by the exiled scientist Dr. Wily. Dr. Wily managed to temporarily repair Proto Man by altering his energy core from a solar to a nuclear one, as well as making other modifications, turning him into a combat robot. He also gave Proto Man the Proto Shield, his helmet and his now-trademark visor in an attempt to hide his identity from Dr. Light. Presumably, working on Proto Man's systems gave Wily greater knowledge in creating robots, helping his plans for world domination along.

Indebted to Wily, Proto Man served him under the alias of Break Man. He did this until his encounters with Mega Man in Mega Man 3 made him realize the true nature of Dr. Wily. Proto Man turned on Dr. Wily, aiding Mega Man but refusing help from Dr. Light, still holding onto his feelings of distrust. 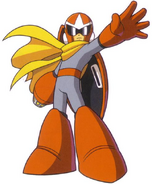 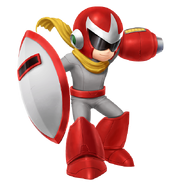