Propane the Hedgehog is a hedgehog hailing from Mobius, gifted with fire abilities. Unlike Sonic, who focuses on speed, Propane focuses on power and thus is a fighter. He was one of the first characters that Exotoro (t∣b∣c) created on the site, although was shamefully deleted in 2011. He was brought back in Super Smash Bros. Bizarre Infinity as one of several Echo Fighters for Sonic the Hedgehog.

Propane's appearance generally is the striking image of Sonic the Hedgehog, except with blue eyes, orange fur, and blue shoes. In his updated reappearance in Super Smash Bros. Bizarre Infinity, he was given darker spines that had a flame-like pattern and heterochromatic eyes in blue and orange. He was additionally given a pair of glasses to emphasize his lack of speed compared to Sonic. He produces flames through his hands and feet, which can be passively pulled off to make him appear as if he is on fire at times.

Propane is generally depicted as a ambitious character that wants to be the most powerful fighter on Earth, willing to go up against anyone. In Super Smash Bros. Bizarre Infinity, while never noted on the actual page, it is implied that he is actually rather new to the fighting scene and copies Sonic's moves in a attempt of getting his bearings. He is also slower and more patient compared to Sonic, although is more irritable. In fact, Propane generally despises Sonic's attitude, finding him rather annoying due to his cocky attitude and quick mannerisms. Despite this, he generally acted star-struck around him at the start before he started to be able to broadcast his real feelings about the other hedgehog.

Prior to his reboot, Propane appeared in Fantendo Epic Dodgeball. Since his character was never ever defined, he pulls off bizarre moves like the Propane Can Can, which has him throw cans of propane at the other team while the Can Can plays. It's a bizarre appearance, especially given he's noted as a speedy character.

Propane the Hedgehog resurfaces as a Echo Fighter in Super Smash Bros. Bizarre Infinity under a rebooted personality and background, as well as a fresh new look. Unlike Sonic, who mostly attacks by forming into a ball, Propane has a bunch of flame based moves that deal a lot of damage but have slow start up. Combined his generally poorer recovery, he was listed as a D-Tier character on the Tier list. Gotta (re)start somewhere, right?

Propane the Hedgehog is generally a mediocre fighter that was given the elemental ability to generate fire out of his hands and feet. While generally speedy, he pales in comparison to Sonic or even Shadow the Hedgehog. When he was younger, he invented some rather bizarre fighting moves that he cringes visibly at when mentioned. As such, he copies Sonic's moves until he's able to come up with his own. 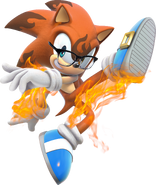 Retrieved from "https://fantendo.fandom.com/wiki/Propane_the_Hedgehog?oldid=3210894"
Community content is available under CC-BY-SA unless otherwise noted.