Professor Layton appears as a playable character in Super Smash Bros. Global Apocalypse. He is available from the start as a newcomer fighter. He can be considered one of the game's most essential Universes, along with Mario, Kirby, Pokémon and The Legend of Zelda. 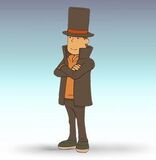 Add a photo to this gallery
Retrieved from "https://fantendo.fandom.com/wiki/Professor_Layton?oldid=2381213"
Community content is available under CC-BY-SA unless otherwise noted.