Professor Elvin Gadd or E. Gadd is a recurring character that pops up all through the Super Mario and Diaper Duty Series. He has made many special gadgets including F.L.U.D.D., Poltergust 3000 Game Boy Horror, Splitter Upererer and others. He has appearead in the Mario RPG series, but his inventions are also used in other Mario spinoff series.

E.Gadd's invention, the Spliter Uperer is the main cause of conflict and the entire plot for the entire game Super Mario Bros Attack of the Clones where his invention has the ability to separate people and their personalities. He fixes the machine at the end of the game when it is no longer needed. He goes back to work on his new invention the Fire Flower in a can.

Gadd makes his first appearnce in a main series Mario game in Super Mario Quartz. Before the events of this game, he is presumably captured by King Boo and trapped inside a painting. When Mario comes to the Haunted Kingdom's mansion, Gadd speaks to Mario while he searches for keys in the mansion. When Mario is about to face off against King Boo and reclaim Cappy, whom the ghost king stole, he notices Gadd in a painting. He is freed from the painting when King Boo is defeated, and he stays around the mansion after that point to run his minigame, 'Boohunter', in which the player catches ghosts using a new Poltergust model in a Luigi's Mansion-esque challenge.

E. Gadd is a player on the Luigi Sidekicks team on the multiplayer Wii sports game Mario Rugby League. He is an average player with above average skill and below average strength. His special skill is to use FLUDD as an extended tackle.

Professor E. Gadd also appears as a playable character in Super Mario Spikers, appearing as a Defensive-type Captain. His outfit consists of a red cloak with red markings and large, jagged collar. Underneath the cloak, he wears a black jumpsuit. In addition, he also built two machines to help give him the edge in the Spikers League, one being a rocket-powered scooter and the other being a backpack with several mechanical hands. The scooter is red and has roller blades, as well as a nozzle similar to the Poltergust 5000 that serves as a rocket thruster to boost it forward. The backpack resembles F.L.U.D.D.'s head, and its arms resemble the following; a blue pair of scissor blades, a green glove, a red boxing glove, a mechanical claw hand, and a head almost identical to F.L.U.D.D. His emblem is the emblem for Gadd Science, Inc. and his theme is Dubstep.

A younger E. Gadd is seen in Diaper Duty 2: The Eggs where he is living amongst the ghosts in ghost valley still working on his Poltergust then on his Poltergust 2001 a reference to the year that E. Gadd first appeared. He sends up a beam to find the Baby Rosalina somewhere in space.

A younger E. Gadd plays a minor role in Diaper Duty 3: Baby Peach's Turn to Shine where he gives Baby Daisy a flashlight.

The young E. Gadd is again seen in Diaper Duty 4: Piranha Plant Storms, this time he has been appointed as the Royal Inventor of the Mushroom Kingdom. After he sends out a distress call he is eaten by the Super Piranha.

The young E. Gadd's true inventing powers are seen in Diaper Duty 5: Koopa Kid Gets Mad where he takes two Anderobots and crafts them and changes them so they are no longer evil Andrew and Andrea although the latter is improved upon by Cranky Kong. 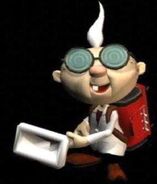 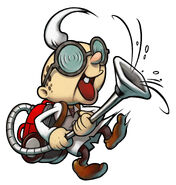 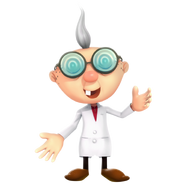 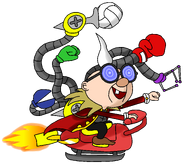 E. Gadd in his Spikers outfit by Exotoro (t∣b∣c)
Add a photo to this gallery

Retrieved from "https://fantendo.fandom.com/wiki/Professor_E._Gadd?oldid=3200032"
Community content is available under CC-BY-SA unless otherwise noted.