View source
“Who's that pig anyway? And why is he wearing glasses?”
— Cranky Kong, Donkey Kong Country Returns

Professor Chops, originally referred to simply as the Tutorial Pig, is a recurring character from the Donkey Kong, first appearing in Donkey Kong Country Returns. Professor Chops serves the role as mentor to Donkey Kong and Diddy Kong during their first Retro Studios-developed adventure, teaching them about various actions they can perform such as climbing vines or swimming. His most prominent appearance in the Donkey Kong titles comes in the form of him working the checkpoint stands that the Kongs pass by during adventures, marking where they return after being defeated.

Professor Chops appears to be a fairly small pig, roughly the same size as Diddy Kong, who is pink in colour. His large snout is a deeper pink colour, and on it sits a pair of black glasses with large circular rims. Chops also has long floppy ears that protrude up off the top of his head, and dark brown hooves on the ends of all four of his limbs.

He is commonly seen with a checkered flag, which Chops waves around once his checkpoints are activated.

Professor Chops appears as a playable character in Jake's Super Smash Bros. as one of the representatives of the Donkey Kong series. Despite their lack of prominence within the games he appears in, Chops' moveset makes heavy use of the various Animal Buddies that appear within the Donkey Kong Country titles.

Professor Chops appears as a playable character in Mario Kart: Infinity Remix. He is a lightweight character, meaning that she as great acceleration and handling stats, though rather poor speed and weight stats. He also has good mini-turbo and poor traction.

Professor Chops is an unlockable character, and is unlocked randomly after winning a gold trophy on any cup on any engine class. 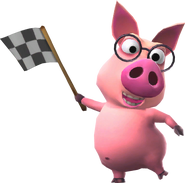