Start a Wiki
Princess Shroob is the main antagonist of the game Mario & Luigi: Partners in time. She is second in command of the alien race known as the Shroob, although initially it appears that she is their leader. She set off a full invasion of the Mushroom Kingdom to make it their own. She had invaded the mushroom Kingdom once again in Super Mario Universal Mission.

After falling underground, Mario and company set out to rescue Peach in Gritzy Caves. When they reach her, she has a Shroob Mushroom attached to her face. They take her back to Princess Peach's Castle in the future. This princess was actually Princess Shroob, and fools everyone, even Bowser, who kidnaps her believing she is Princess Peach. Bowser brings her to Thwomp Volcano, and after he is defeated by Mario and company, the Shroob Mothership arrives and captures the princess. Mario, Luigi, and their younger selves follow, still believing she is Princess Peach. Once they finally reach "Princess Peach", Princess Shroob reveals herself. She is about to get rid of them, but is blasted away by a disguised Kylie Koopa. This victory is short lived when she recovers and then drops Mario and his friends off of the Shroob Mothership. The four Mario bros. eventually make their way through a shroobified Peach's Castle and hijack a Shroob Battleship and engage the Shroob Princess in a dogfight with the Shroob Mothership. After blasting the Shroob Mothership out of the sky the Princess emerges from the wreckage. She appears to have gone mad, declaring Peach useless, the kingdom hers, and that she will destroy them all, shouting "Destroy!" several times. She then enters battle with them.

The Cobalt Star shards are located in many places that Princess Shroob should have been aware of, such as the Vim Factory. It is unknown why she did not attempt to have the Cobalt Star restored and bring her sister back to power. 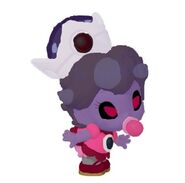 Princess Shroob with her Sister
Add a photo to this gallery
Retrieved from "https://fantendo.fandom.com/wiki/Princess_Shroob?oldid=2857062"
Community content is available under CC-BY-SA unless otherwise noted.