Princess Shokora is a character from Wario Land 4. Long prior to the events of the game, Shokora was the princess of an unidentified kingdom. One day, while resting inside of a Golden Pyramid, Shokora was cursed by a being known only as the Golden Diva. The curse put on Shokora transformed her into a small black cat, though she was still able to escape the pyramid and explore it and the surrounding lands freely. After this Golden Pyramid is rediscovered by modern society, Shokora makes contact with Wario, a treasure hunter aiming to steal the pyramid's treasures.

The Golden Diva put a curse on Princess Shokora some time prior to the events of Wario Land 4, which transformed her into a cat. In addition to this form however, Princess Shokora seems capable of transforming into a variety of different characters. One such form is the Item Shopkeeper, who also displays this shape-shifting ability by transforming into some of the different "items" that Wario can purchase, namely Black Dog, Large Lips, Big Fist, and Black Dragon.

Depending on the amount of treasure chests Wario collected throughout the game, Princess Shokora's human form will change once she is freed from the curse. These forms are:

All four of Princess Shokora's forms will kiss Wario on the cheek before ascending to heaven in the game's epilogue. The way the treasure hunter reacts does however differ depending on the form she takes. Wario will be disgusted or confused when kissed by the Bratty Baby and Hideous Princesses, and instead be pleased and embarrassed when kissed by the Cheeky Young and True Princesses.

Princess Shokora appears in the final season of Super Mario Revival, Super Mario Unite!. She had come from the afterlife to aid Mario, Wario, and their friends against the new evil.

She is usually shown allied with Mona and Merelda. Shokora possesses light powers, and one such attack of hers is Radiance Beam. Her light powers are a reference to her angelic ascension in Wario Land 4.

In the ending credits for Super Mario Unite, Shokora is shown dancing at the ball with Princess Eclair.

In this series, Shokora appears in her grownup/adult form rather than her teenage form, which is commonly used in other titles.

Princess Shokora appears as a starting racer in Mario Kart: V² Circuit. She is a mediumweight with a large size. She has an average speed, slightly above average acceleration, slightly below average handling and slightly above good traction.

Princess Shokora appears in Jake's Super Smash Bros. as a playable character. Shokora's special moves and Final Smash are all based on the various items that she sells when disguised as the Item Shopkeeper. In particular she makes use of the Apple Bomb, Bugle, Big Fist, and Vizorman items for her neutral, special, up, and down special moves respectively. For her Final Smash the princess transforms into the Black Dragon, and spews out a stream of fireballs that travel a great distance before exploding.

She's one of the survivors of the Kirthar's Snap Finger. 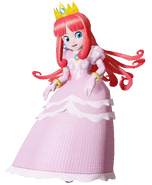