Princess Morina is a new princess from Sunshine Island and is Princess Daisy's childhood friend. She first appeared being kidnapped by the sea king, Neptune, who wanted to marry her, but she was saved by the Mario Bros. She is shown to be in love with Alberto, the best friend of the Mario Bros. She dislikes Walberto who picks on Alberto and has a crush on her, which she thinks is gross (despite herself having a crush on Alberto). She is two years younger then Peach and Daisy, making her the youngest princess.

Morina is soft, kind and friendly when around her friends and Alberto who she loves very deeply and cares about, even if she won't say it to him or anyone, but can be tough when danger comes. Morina hates being a princess and wishes to be a normal girl who wants to have fun and have freedom in her life. Her worst fear is being by herself.

Morina bears a similar facial appearance to Princess Daisy. She wears a magenta dress, with three layers, that is knee-length. Her hair is long, dark brown, and is worn down, with long side braids. She does not wear any makeup and even goes barefoot. She also wears a yellow sun gem on her chest given to her by her mother when she was very young.

Unlike Peach and Daisy, Morina has green eyes. She wears a small crown, even at formal ceremonies, she wears her bronze crown with the same sun gem and green triangle earrings. She also has a deep tan that comes from her being in the sun a lot.

In sports, she wears a similar outfit to those of Peach and Daisy, but her outfit has sleeves on it and she wears a baseball hat instead of her crown. She also wears her hair in a ponytail with a purple scrunchie.<brclear=all/> 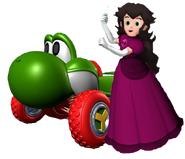 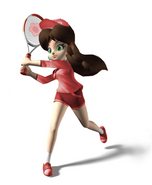 Morina's Emblem (Credit go to my closet friend, CaitlinTheStarGirl from deviantart)
Add a photo to this gallery
Retrieved from "https://fantendo.fandom.com/wiki/Princess_Morina?oldid=3144636"
Community content is available under CC-BY-SA unless otherwise noted.