Fantendo - Game Ideas & More
Register
Don't have an account?
Sign In
Advertisement
in: Articles under Construction, Free to use Characters, Characters,
and 12 more

Princess Kalatia is the main protagonist of The Shadows in the Stars. She is the older child of King Raxun of Aimlo, the younger one being Prince Dominic; thus, she was destined to rule the land after he died.

During the events of the game, Dominic banished her to the farthest edge of Aimlo, claiming that she had committed a crime against him, so he could be king. Kalatia managed to return to the castle, and confronted her brother. She opted not to kill him, instead imprisoning him for some time. She took her rightful position as the queen of Aimlo at the end of the game. 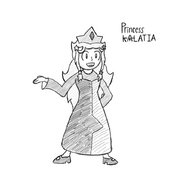