Princess Bowser (Japanese: クッパ姫 Koopa-hime), also known as Princess Koopa, Peachser, and Bowsette, is Bowser under the effects of the Super Crown, sometimes explained as a modified version of such created by Kamek. In this form, Princess Bowser gets additional mobility in the air, such as a double jump and glide, as well as a boost out from pits. She is also able to utilize her flame breath.

Whether this is simply a power-up or a new identity for the former Koopa King tends to vary from story to story.

Princess Bowser resembles Princess Peach, but she has Bowser's horns and ponytail hair. Her hair color is either red with blond highlights or straight up Peach's blonde. She wears a black version of Peach's attire with no straps similar to her wedding gown and has many spiky collars. She has Bowser's shell and tail, inheriting them from her past form.

Princess Bowser is a kinder version of Bowser that leans less on his menace and villainy in some stories. Given she wants to reconnect with the people she has hurt, this means she tends to have to keep her more vile traits under control, although she tended to be very argumentative and it's implied she went through the tennis court in Crown of Horns so Peach would see her and get mad/jealous about it. She shows quite a bit of change when talked to though, suggesting she does want to be a better person.

Princess Bowser possesses the powers of the Super Crown, which allow her to double jump, glide, and jump out of pits. In addition to this, she is also able to breathe fire as she used to as the Koopa King. It's likely she can also grow in size and has her brute strength retained, as well as being able to throw hammers.

Princess Bowser appears in this short story as the form Bowser takes after the events of Super Mario Odyssey, wanting to transition into being a woman. Peach takes issue with it given what happened on the moon as well as what Bowser did to her in the past, but she is given a fresh start by Mario and Peach so long as Princess Bowser never terrorizes the Mushroom Kingdom again. Mario and Princess Bowser kiss at the end of the story, with Mario unsure of what to make of it at the end of the story.

Princess Bowser appears in Super Smash Bros. Bizarre Infinity as an echo of Peachette, who is a echo of Peach. She additionally takes moves from Bowser and modifies them in slight ways, such as ending in a neck chokehold as opposed to a straight up ground pounding Bowser Bomb.

Mario Party: To The Max

Princess Bowser, referred to as Bowsette in this game, is one of Fawful's enlisted allies in the Story Mode and one of the CPU opponents in said mode, alongside a hypnotized ally on each board. She is unlocked as a playable character upon beating the story mode.

Bowsette appears as the 1st DLC character in the game.

Princess Bowser is a variant of Bowser that can be created by using the Super Crown on Bowser in Super Mario Maker Chi. Princess Bowser attacks with flame projectiles and hammers, but also does a hip lunge attack similar to Peach's Peach Bomber move from the Super Smash Bros. series, attacking Mario directly. She can be defeated with 20 fireballs and will jump out of pits with the Super Crown's ability in most circumstances. She can also be instantly defeated with a Thwomp, POW Block, or ground pounded by a Goomba's Stiletto.

Bowsette appears as the main antagonist alongside Wendy O. Koopa, both of them are non-playable bosses.

Princess Bowser as she appears in Crown of Horns 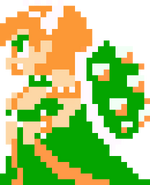 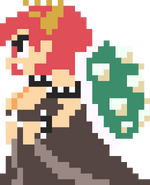 Another art of Princess Bowser by Helena (t∣b∣c)

Artwork of Princess Bowser made by User:Computerboy64 1

Artwork of Princess Bowser made by User:Computerboy64 2

Artwork of Princess Bowser made by User:Computerboy64 3

A (kinda bad) render of official bowsette by User:Risabom 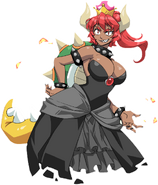 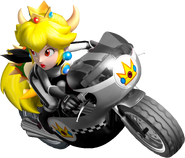 Bowsette on her Mach Bike. 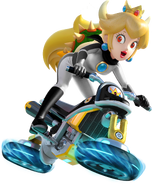 Retrieved from "https://fantendo.fandom.com/wiki/Princess_Bowser?oldid=3320466"
Community content is available under CC-BY-SA unless otherwise noted.