Prince Peasley is the prince of the Beanbean Kingdom. He is a beanish boy with blonde hair. His smile is said to light up an entire room.

Prince Peasley appears as an assist trophy in the game. He does either two things when he is summoned; he either attacks opponents with his sword or flaunts his hair, releasing a bright light that stuns opponents and meteor smashes airborne opponents (albeit weakly). 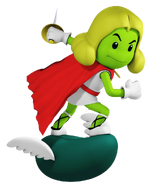