Prince Icing Jonathan Wray Eggerton or better known as simply Ice, is the last living creature to live on Earth. As in, no hope for return for humanity, as he is literally the last one. He suspects that at one point he used to be a human, though he has no memory of being one. The day that he was technically born was the day he came out of the large glacier he was in, for who knows how long. After emerging, he gave himself a name, based on what identification he had, and declared himself as the prince of the land. He has a Polarbear, that he named Trev, who is his only friend in the lonely Earth he lives in. 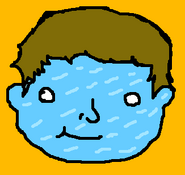 A mugshot of Ice

ice after taking a hyper realistic selfie
Add a photo to this gallery
Retrieved from "https://fantendo.fandom.com/wiki/Prince_Icing_Jonathan_Wray_Eggerton?oldid=3008904"
Community content is available under CC-BY-SA unless otherwise noted.