Start a Wiki
“Thanks Luise, you are a life saver..”
— Prince Darice thanking Luise


Prince Daisley is the gender-swapped version (and brother) of Princess Daisy, friend of Prince Pearce and the Prince of Sarasaland.

He is funny, clever, and ambitious similar to his counterpart. He is always the go-with the-flow kinda guy, but knows how to have fun. He is also very subtle, but can be energetic. He can also be stubborn at times too.

He wears a similar outfit to his best friend Prince Pearce and a identical color scheme to his female counterpart, Princess Daisy. His shirt is yellow with yellow poofy sleeves, and he has long yellow sleeves that extend outside the poofy sleeve. He wears a teal flower brooch and crown, similar to Daisy. His features are also very similar to daisy and Prince Pearce, except he has a mustache and a light shadow beard. [[ He also has Auburn-brownish hair like his Daisy that stops at the back of his head.

He makes an appearance in Super Mario Universe.

Darice and Luise were taking a walk when suddenly, thunder struck the palace and Luigi and Luise ran down to see the catastrophe. Tantanga had came and kidnapped him. Luise and Maria have to save them both with the help of the Toads and Toadette.

﻿*He rarely comes to the Mushroom Kingdom due to his responsibilities in Sarasaland. 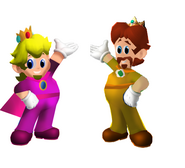 Prince Pete and Prince Darice together.

Darice
Add a photo to this gallery
Retrieved from "https://fantendo.fandom.com/wiki/Prince_Daisley?oldid=2444555"
Community content is available under CC-BY-SA unless otherwise noted.