Primids are enemies that appear in Super Smash Bros. Brawl, specifically in the Subspace Emissary. They are low-level goons of the Subspace Army, and are the most frequently encountered enemies in the game. They resemble green, humanoid beings with black arms and legs, brown gloves and boots, a black face, and a red feather on its head. The emblem of the Subspace Army is embedded in its chest. Primids are made out of Shadow Bugs, which leak out of their back.

Primids, being among the most common enemies in the Subspace Emissary, are fairly basic enemies. They will try to approach the player and use melee attacks, usually involving their hands, feet, and body. These attacks deal low damage and knockback, and their health and defense are low, meaning they can be taken out easily. On the flipside, they sometimes appear in large groups, making them difficult to deal with if the player is overwhelmed.

Outside of Brawl, a Primid appears in Super Smash Bros. Ultimate as a Spirit, where its Spirit Battle pits the player against eight Mr. Game & Watch's, referencing how Tabuu extracted Shadow Bugs from Mr. Game & Watch to make the Subspace Amry.

Outside of the regular variety, there are six known variants of Primids that appear throughout the Subspace Emissary, each with their own appearance, attack patterns, and statistics.

There are many different faces that a Primid can have. The faces change each time Adventure Mode is loaded up.

A Primid reappears in Super Smash Bros. Fusion as a downloadable playable character, and was released on September 21, 2015. His special moves are all based upon the Subspace Emissary from Brawl, as his standard special move has him shooting three blasts from the same weapon used by Scope Primid, his up special being him holding on to a Buckot in a matter not unlikely Solid Snake's up special from Brawl, his side special has him throwing a boomerang, just as the Boom Primids did in Brawl, and his down special has him spinning around whilst holding a Jyk. Primid's Final Smash has him riding atop a Towtow as it rampages around the stage before falling asleep and disappearing.

Primid's on-screen appearance has him being formed by a group of Shadow Bugs. His victory animations include him jumping up and down wildly, his Shadow Bugs dispersing and him "melting", and him riding on a Towtow, trying to calm it down.

Primids reappear as enemies in Super Smash Bros. Charged, where they can be encountered in Smash Run DX. All varieties appear, and function the same as they did in the Subspace Emissary Super Smash Bros. Brawl 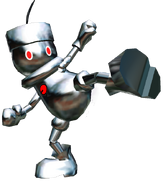 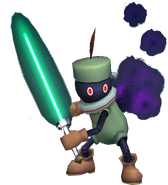 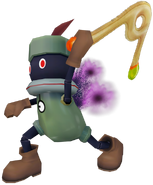