Porygon-Z (Japanese: ポリゴンZ PorygonZ) is a Normal-type Pokémon. It evolves from Porygon2 when traded holding a Dubious Disc. It is the final form of Porygon.

Porygon's head is fuchsia and ovoid in shape with a short, blunt antenna protruding upwards and a blue bill similar to that of a duck. Its eyes are yellow and have black rings, similar to a bulls-eye. The head is completely detached from the body and floats slightly above it. Its smooth, ovoid body is fuchsia with a blue ring connecting its arms. Two arms are loosely connected to its upper body and other than their blue color, have no features. The tail is also blue and featureless, but slightly resembles a paddle.

Porygon-Z was given additional software in order to increase its abilities. The initial idea was to give it the ability to travel through alien dimensions, but an error occurred. Instead, the Pokémon began acting erratically. Porygon-Z, and its pre-evolutions are the only known Pokémon that can learn Conversion and Conversion 2.

All canon Pokémon are available in Tropes vs. Women in Pokémon Training, including Porygon-Z. Regular Porygon-Z can't be found in the wild in this game; however, it has a Sanclairian regional form that can, and has the following differences:

The Sanclairian version of the Porygon line is billed as an "open source fork" of the original source code, essentially a Pokémon version of Linux.

An attempt by Silph Co. to make a "perfect" Porygon. They messed up hard and completely wrecked the damn thing, resulting in this glitched, broke-ass bucket of bolts.

This open-source fork of Porygon-Z is far less glitchy than the original, but it comes at the expense of a very cancerous, entitled community. Legend has it that Team Femme has infected this community in some way. 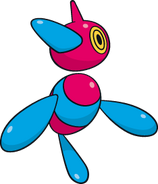