Popplio (Japanese: アシマリ Ashimari), is a Water-type Pokémon. Along with Rowlet and Litten, Popplio is one of the Starter Pokémon of Alola.

Popplio is a navy blue pinniped with white fin markings on its front flippers, and a cyan ruff-shaped feeler resembling a Pierrot collar. Its head consists of two large eyes on each side, two canine-like ears and a white, conical muzzle, tipped with a big, round nose in pink and decorated with two whiskers on each side.

Popplio can create balloons made out of water from its nose, which it spins around skillfully as if it were in a circus act. It is both frivolous and hardworking, and can easily get carried away and turn a Pokémon battle in a spectacle.

Popplio can swim at 25mph, and is generally better at swimming than at moving on land. However, it is a skilled acrobat and makes use of the elasticity of its water balloons to perform acrobatic jumps. Popplio is fueled on determination and is usually found practicing hard on its balloon skills. 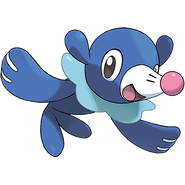 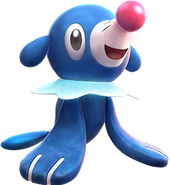 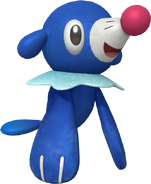 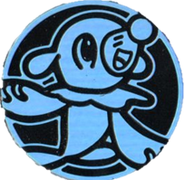 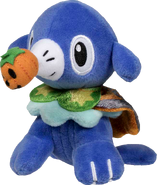 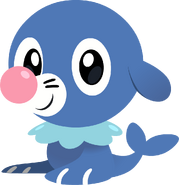 Popplio is based on a sea lion, especially one trained for circus acts.

Popplio may be a combination of pop and lio from Ilio-holo-i-ka-uaua, the Hawaiian name for the Hawaiian monk seal, meaning "dog that runs in rough water". lio also sounds like leo, Latin for lion.