Fantendo - Game Ideas & More
Register
Don't have an account?
Sign In
Advertisement
in: Free to use Characters, Characters, Joke Articles,
and 8 more

Poopbutt Koopaling Classic is one of the several billion (number may be inaccurate now, but just wait!) koopalings that are under Bowser's eye. He was placed in this cruel, uncaring world by Bowser, who just pooped him out one day and ever since he's been a Koopaling. And you know it’s true! Now you might think this is dumb, but really, it's not any worse than any other Koopaling backstory.

Poopbutt is a gentlemanly Koopa who opens doors for everyone except Waluigi, because Waluigi. It is unknown why he has contempt against Waluigi beyond just stating his name again. In general, Poopbutt is unbelievably forgiving, sometimes joining the Mario Bros if they got some spaghetti around to spare. He's also somewhat a babyist and usually is seen trying to toss Baby Mario in the trash.

In his free time, he attempts to drown horrible cars at a gas station- naturally failing of course, to his mounting anger. On top of this, he has a secret and debilitating addiction to pub trivia.

He is also a try-hard at humor.

If smelling bad is a ability, he has that going for him. He doesn't appear in any real games, and even fake fanon games don't include him. One imagine he would have powers to shit out of his hands, but he doesn't and maybe we're better off for that.

Bowser brought him into this world, and if Poopbutt doesn't pay the mortgage he's gonna be taken out of it.

While the Koopalings were cool, there were only seven. That stopped being a problem as soon as a unidentified mother of the children showed up in the picture. This mysterious mother began giving birth over and over again to koopalings—and she hasn’t stopped since!

“Before this, there were only seven koopalings left on the entire planet and most people were fine with that, but ever since she started giving continuous, unceasing birth to thousands of koopalings, that number has been increasing rapidly,” says the doctor who assists in these demonic births. He notes that while he and his team attempted to count how many Koopalings she has given birth to so far, they lost track at approximately 3,000. “Sometimes she’ll give birth to one koopalings, and then 30 seconds later, give birth to another. Sometimes she’ll blast out seven koopalings into the air in a single-file line all at the same time. It never stops. This is an exciting step forward for this once-endangered species.”

And them’s the facts! 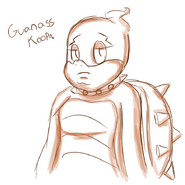 no
Community content is available under CC-BY-SA unless otherwise noted.
Advertisement