Poochy is Yoshi's pet dog who follows Yoshi throughout the Yoshi's Island series. You can leap on his back to scale spikes, or guide him to hard to reach places to get daisies or yarn.

Poochy is a medium-sized brown and white dog with an abnormally large mouth, with a large tongue. He also has small, black eyes, and a tail with a circle that sticks out on the end. He wears a black collar with gold buttons on it.

Poochy appears in Mario Kart Double Dash: All Powered Up! He appears in the background of Yoshi's Egg Pass and Police Guy's Pass.

In Yoshi's Island U, Poochy does not appear until act 1 of the plot is finished. Once it is, Poochy gets his own levels, with no Yoshi. Then, Poochy is transported twenty-five years in the future, along with all of Yosher's Isle and surrounding area.

In PoochyQuest: The Dogs Awaken, Poochy has his first major role in a Yoshi game. Poochy has to save his home by finding Yoshi, and then returning for a face off between them and the final boss. 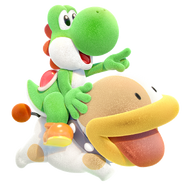 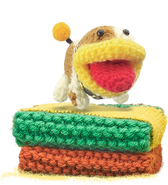 A sprite of Poochy
Add a photo to this gallery
Retrieved from "https://fantendo.fandom.com/wiki/Poochy?oldid=3204314"
Community content is available under CC-BY-SA unless otherwise noted.