Ponyta (Japanese: ポニータ Ponyta) is a Fire-type Pokémon. It evolves into Rapidash starting at level 40.

Ponyta is an equine Pokémon with yellow and reddish-orange flames forming its mane and tail. This fiery mane and tail grows out about an hour after hatching. Its body is mainly cream and has four long legs, each ending in a single, gray hoof. These hooves are said to be harder than diamonds. It also has extraordinary jumping abilities, and is capable of leaping tall buildings in a single bound. However, a newborn Ponyta is a weak runner and is actually barely able to stand. It gradually strengthens its legs and becomes faster by chasing after its parents. In the anime, it is shown that Ponyta can control its flames so that its rider is not burned by them. Ponyta runs in fields and mountains all day. Ponyta live in grasslands, on plains, or anywhere that it can run freely.

Ponyta and its evolution are based on fiery steeds in mythology, such as those belonging to the Greek god Helios, Skinfaxi of Norse mythology, or the horses of the Ashvins in Hindu myth. The fire in its Shiny coloration refers to blue fire, which generally indicates a higher temperature than orange fire but may also be caused by certain chemicals burning at a normal temperature.

Ponyta is derived from pony. It phonetically sounds like the foreign word bonita (nice in Spanish, Basque, and Catalan; beautiful in Portuguese and Galician; goodness in Latin). It could also be a shortened form of ponytail. 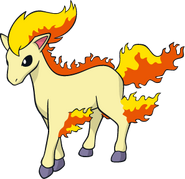 Generation VI
Add a photo to this gallery
Retrieved from "https://fantendo.fandom.com/wiki/Ponyta?oldid=2147553"
Community content is available under CC-BY-SA unless otherwise noted.