“Great! I’m a winner at pretty much everything!”
— Pom Pom, Super Mario Party

Pom Pom (Japanese: プンプン Punpun) is a recurring boss in the Super Mario series. Pom Pom first debuted in Super Mario 3D Land, and has since made numerous appearances, often alongside her male counterpart Boom Boom, whom she often works with. Unlike Boom Boom, who relies on his brute strength, Pom Pom is a more tactical fighter, utilizing boomerangs and shurikens in battle alongside the ability to teleport around the stage in clouds of smoke. It can be assumed that she is a fairly high ranking member of the Koopa Troop, as Bowser has dispatched Pom Pom fairly frequently in his attempts to prevent Mario from rescuing Princess Peach; it is likely that she (and Boom Boom) is beneath only Bowser, his son, and the Koopalings in rank.

According to the booklet released alongside the official soundtrack for Super Mario 3D World, Pom Pom wishes to appear as a refined and elegant individual, though as she possesses a short temper she comes across as far more aggressive than she wishes to be.

Pom Pom appears as unlockable playable character in the racing game Bowser's Castle Racing. Pom Pom is one of Bowser's "henchwoman", able to launch boomerangs, in fact this orphan koopa was adopted and raised by two Boomerang Bros. She's definitely smarter than her partner Boom Boom and she is not going to lose.

Pom Pom appears in Mario Hoops 3-On-3 Switch as a playable character. She is a Powerful character type and her special move is Boomerang Shot. She is a Secret Character to unlock her you must beat Pom Pom in Story Mode on Hard Difficulty (or above). Her default partner is Boom Boom. His team name is the Pom Pom Boomerangs.

Pom Pom appears in Super Mario Garden as the mini-boss of the worlds Mario and Co. Travel in. She will use various attacks during her boss fights in order to make sure Mario doesn't get past her.

Pom Pom returns from Super Mario Maker 2 in Super Mario Maker Chi, this time appearing in all game styles. She attacks by teleporting around and throws giant shurikens when she teleports. When she is attacked, she retreats into his shell, which has protruding spikes. In Super Mario 3D World style, spawns duplicates of herself and attacks by throwing shurikens at players. The real Pom Pom wields a pink shuriken. She is defeated after three stomps. Pom Pom has a placement limit of five per subarea and shares placement limits with Boom Boom.

Master Pom Pom is a variation of Pom Pom that appears in Pac Attack Remix.

After it was discovered that Boom Boom and Pom Pom were actually members of two separate species, Pom Pom variations began showing up. The first of which is referred to as a Master Pom Pom. This particular type of Pom Pom is able to shoot dark energy projectiles, and wears fingerless gloves, a bandana which holds four beads on each end, and a Scarf around her mouth. Additionally she wields an Electric Boomerang, distinguishable by its sharp edges and cyan-coloured ring of electricity.

Being significantly more dangerous than a regular Pom Pom, Master Pom Pom is also able to perform the decoy attack that regular Pom Pom can: she also has a slight variation where she can turn invisible, forcing Mario to look at the darkness of the shadows to determine which one is the real Master Pom Pom.

Though not explicitly named as such, Master Pom Pom is referenced in Jake's Super Smash Bros. through her colour scheme being used for one of Pom Pom's alternate costumes. 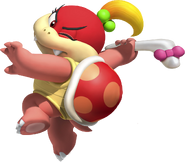 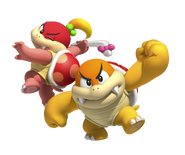 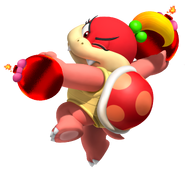 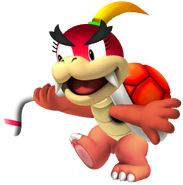 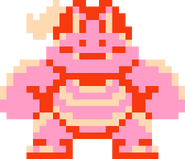 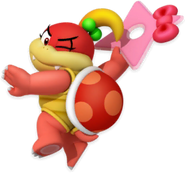