The game was developed by Namco and published by Nintendo. It was released in Japan and Europe on September 10, 2015, in North America on September 16, 2015 and Australia in September 19, 2015.

Many features return from Pokkén Tournament, however, a lot of these mechanics have been tweaked and have new elements to them, such as Specials having the new PP Bar mechanic.

Just like in Pokkén Tournament, each Pokémon has a Burst Mode. In this mode, all attacks do more damage and the player can perform a special move called a Burst Attack, dealing a high amount of damage to the opponent. The player can activate Burst Mode  by pressing

when the special gauge is filled. To activate a Burst Attack, the player must be in Burst Mode and press

again. Burst Mode only lasts a short amount of time and using the Burst Attack will take away most of that time.

Trainer Customisation returns in Pokkén Tournament U, but with many more options for hairstyles, expressions and clothes. Amiibo can be used to unlock clothes of the amiibo used, such as a Mario cap from the Mario Amiibo.

Pokkén Tournament U utilises the Protecting/Guarding mechanic from it's arcade predecessor. Nearly every move can be blocked by protecting/guarding, with the exception of a few Specials and all of the Burst Attacks.

Like Pokkén Tournament, the game has both strong and weak attacks can be made.

Specials returns in Pokkén Tournament U, but have a new mechanic, the PP Bar (see below). Each Pokémon has 4 Specials based off of moves that the Pokémon can learn in the main series' games.

Another feature returning in Pokkén Tournament U is Support Pokémon. The player can call a Support Pokémon in the middle of a battle to perform a move and deal damage to their opponent. Unlike the original, a cutscene is played sending the Support Pokémon out before it performs the move, some Pokémon even Mega Evolve before using a move.

Although most of the original game's core mechanics return with some slight tweaks, a few new features are included in Pokkén Tournament, mainly modes and other gametypes that wouldn't work on arcade machines.

As mentioned before, Amiibos can be used to unlock clothes and gear for trainers to wear based on the Amiibo. Some Amiibo even unlock costumes for Pokémon.

A new feature in Pokkén Tournament U is the PP Bar (Power Point Bar), it is located next to a Pokemon's special gauge. When a player uses one of their Pokemon's specials, some PP will be deducted. If a player uses all of the pokemon's PP up they will have to wait until it replenishes. Some  Pokémon have more PP than others and some Pokémon's PP Bars replenish faster than others. The amount of PP used for a move varies, usually depending on how powerful the said move is.

One of the major new features of the game is being able to fight against other players online from around the world. There are multiple ways to play online including ranked matches, just for fun, tournaments and battling against friends.

Two new modes in Pokkén Tournament U, Tag and Team Battles, allow players to play as multiple Pokémon and switch between them in a batte. Tag battles also allow players to work together as a team.

There are a few different methods of playing the game, they are listed below.

Similar to Super Smash Bros. for Wii U you can connect your Nintendo 3DS to the Wii U and use it as a controller.

There are a total of 47 playable characters in Pokkén Tournament U. 24 are availible at the start, 17 must be unlocked and 6 are downloadable. Each fighter has different moves, stats and fighting styles.

These characters are availible from the start of the game.

Instead of unlocking fighters for meeting the certain criteria, you must also defeat the Pokémon in a battle, similar to how characters are unlocked in the Super Smash Bros. series.

By scanning the Pikachu Amiibo, players can unlock Cosplay Pikachu. Each different outfit counts as a unique character and they all have slightly different stats and their own different Burst Attack. All 5 are Balance type fighters.

Each of the 6 DLC packs contained 1 new playable Pokémon. 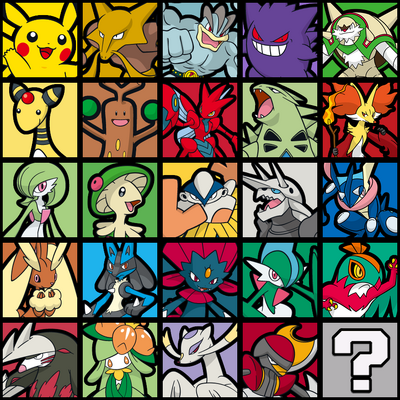 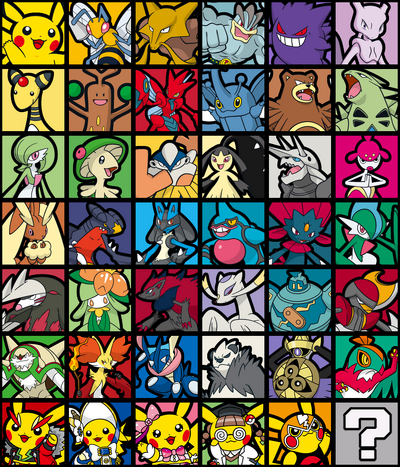 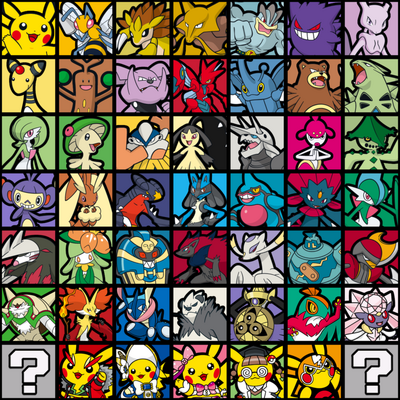 Before entering a match, players choose two Support Pokémon to help assist them in battle. Before the round starts, the player must choose one of the two chosen to help them for the current round. Each Pokémon has a set move that it will perform when sent out. There are 90 (18 of which are DLC) Support Pokémon in Pokkén Tournament U as shown below. To find out more about the Pokémon support move, hover over their icon.

In singleplayer modes, players will sometimes battle trainers from the Kalos, Unova and Hoenn regions. All of these trainers, along with their Pokémon and Support Pokémon are listed below.

Trainer Customisation returns in Pokkén Tournament U, but with many more options for hairstyles, expressions and clothes. Amiibo can be used to unlock clothes of the amiibo used, such as a Mario cap from the Mario Amiibo. Only clothes unlocked with Amiibo and DLC Pokémon Cosplay items will be listed below. All of the other items will not be listed.

The following 18 Pokémon have cosplay clothes based on them, the design will change based on the player's gender.

Retrieved from "https://fantendo.fandom.com/wiki/Pokk%C3%A9n_Tournament_U?oldid=2072307"
Community content is available under CC-BY-SA unless otherwise noted.