Pokémon Purgatory Version is the third version of its sister games, Pokémon Heaven and Hell Versions for the Nintendo 3DS, released as part of Generation VIII. This game contains new features, new characters, new pokémon from old and new (excluding regional variants), a difficulty setting borrowed from Black 2 and White 2, new cities, and an advanced plot that gives Shavavoom a much larger role.

Regional Pokedex in the Olpium Region 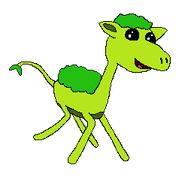 Whipuff's new artwork
Add a photo to this gallery

Pokémon Purgatory Plus is an update to the original version, which added 9 new TMs, 3 more places, new pokémon based on the unused ones from the Spaceworld 97 demo from Pokémon Gold, 3 new characters, and an additional Rod called the Ultra Rod, which can lure rare Pokémon after obtaining the National Pokedex.

Retrieved from "https://fantendo.fandom.com/wiki/Pokémon_Purgatory_Version?oldid=2671552"
Community content is available under CC-BY-SA unless otherwise noted.